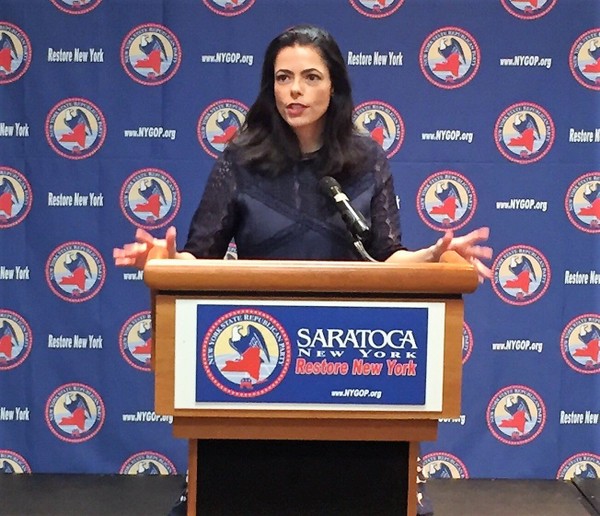 US Senate candidate Chele Farley (R.C. Reform) on Tuesday, 23 Iyar, called on President Trump not to recertify the Iran deal. Speaking as she left Yad Vashem, Israel’s national Holocaust memorial, Farley said: “Never Again is now! We cannot allow the genocidal regime in Tehran to obtain a nuclear bomb. I call upon President Trump not to recertify the Iran deal on May 12.” She added, “Iran is a threat to the free world and that deal should have never been signed. Anyone who supported such a terrible deal should be held accountable.”

Farley went on to blast the Democratic incumbent she is running against: “Kirsten Gillibrand pays lip service to Israel but supported the Iran nuclear deal, which effectively will pave the way to Iranian nuclear weapons. These missiles will not only be pointed at Israel, but also New York. For decades, Tehran has made their stance clear: First they are coming for Israel, then America.”

“Being in Israel has only strengthened my faith and support for this incredible nation. They have risen from the ashes to create a thriving country. As Iran threatens her very existence, Israel must never be forgotten. America has no greater friend in the Middle East. As American patriots we need to stand unwavering in our support for the Jewish State,” said Farley.

Farley’s visit includes a number of religious, historical and cultural destinations across Israel, as well as meetings with prominent Israeli & American officials. The US Senate candidate has publicly expressed her support for pro-Israel congressional legislation, unlike her opponent. Senator Gillibrand voted against the Taylor Force Act on March 23, 2018 and announced that she had withdrawn her prior co-sponsorship of the anti-BDS Boycott Act in August 2017.

Chele Farley is an outsider with over 25 years of experience in the private sector. She is the endorsed Republican, Conservative and Reform Party candidate for US Senate. Farley lives in New York City with her husband Richard and their three sons. For more information about US Senate candidate Chele Farley, one may visit her website. www.CheleFarleyforSenate.com