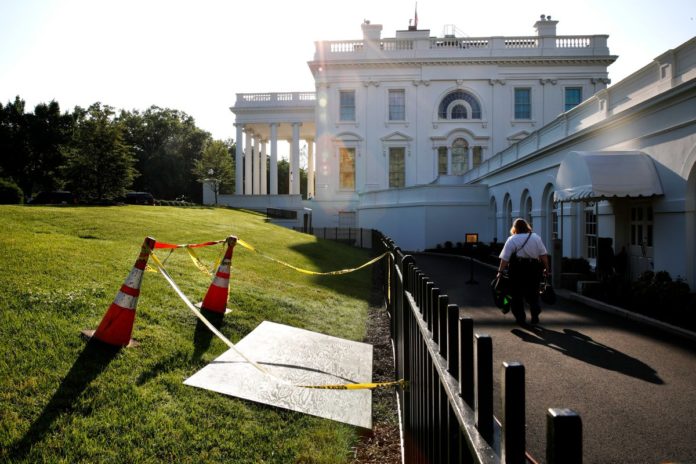 A sinkhole appeared on the White House’s North Lawn on Tuesday, which naturally spawned jokes on the internet.

The sinkhole, confirmed by groundskeepers, is just outside the office of White House deputy press secretary Hogan Gidley and the White House press briefing room.

The sinkhole, which according to reporters who have observed it appears to be growing, was roped off with cones and caution tape. Trump is always talking about draining the swamp and now the swamp is trying to drain him.
#Sinkhole #Trump #WhiteHouse #DrainTheSwamp pic.twitter.com/oDVLeF23Pm

This week I’ve been observing a sinkhole on the @WhiteHouse North Lawn, just outside the press briefing room, growing larger by the day. pic.twitter.com/BsFUtxFqpB

Normally they dont appear unless the ground below has been disturbed.

Is someone digging tunnels under the Whitehouse? And if so, who?

ICYMI: A sinkhole has developed on the White House lawn 😬 pic.twitter.com/rilAHLCv9S

Update: The @WhiteHouse sinkhole is now a cover-up. pic.twitter.com/X031j3SL0u

It seems God has chosen the Korach approach to deal with the Trump administration. https://t.co/GUZvKQZKqf