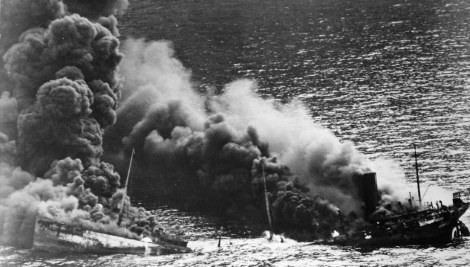 A deep dive operation will be conducted to determine whether oil is leaking from a British tanker sunk by a German U-boat off Long Island during World War II.

A contractor has been hired and the work will be done in consultation with the Navy, National Oceanic and Atmospheric Administration and New York Department of Environmental Conservation.

The wreck, which is about 30 miles (48 kilometers) off Long Island’s south shore, and about 180 feet (54 meters) deep, has been monitored since 1967. In 2009, recreational divers reported some oil seepage, the Connecticut Post said.

The Coimbra was torpedoed in January 1942, killing 36 officers and crew.

German U-boats sank 148 petroleum tankers and countless other ships near the U.S. Gulf and East coasts.

Some came harrowingly close to heavily populated areas. The one that torpedoed the Coimbra had ventured just hours earlier along the New York City shoreline, bobbing on the surface near Rockaway Beach, Queens, and in view of Coney Island’s Parachute Jump and Wonder Wheel amusement rides, according to “New York at War,” a book by Steven H. Jaffe.

The seemingly peaceful scene was a precursor to destruction.

“As the torpedo slammed into the hull of the Coimbra, it ignited the tanker’s 80,000 barrels of oil and sent a blinding sheet of fire boiling up into the night sky,” Jaffe wrote.

The government censored information on such attacks and counterattacks, and asked that any witnesses keep quiet as a matter of national security.

But “with the Coimbra’s oil and life preservers washing up on Long Island beaches, and survivors reaching shore, a news blackout was impossible,” wrote Jaffe.