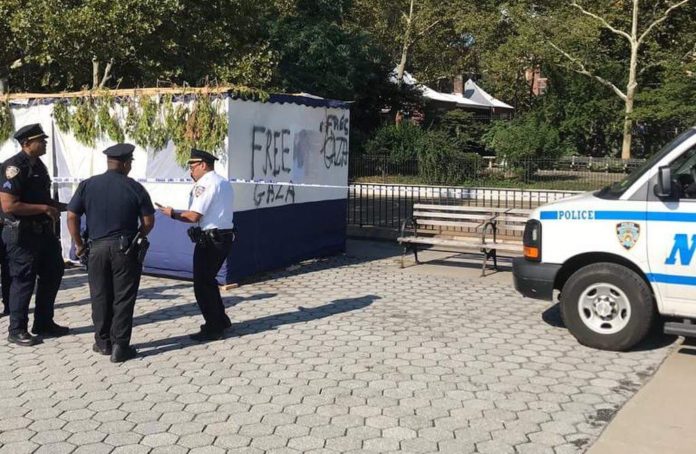 A Sukkah constructed by a Chabad center on Manhattan’s Upper East Side was found vandalized on Sunday, Hoshana Rabba.

The NYPD was on scene investigating the sukkah at Carl Schurz Park, defaced with the words “FREE GAZA” written in black spray-paint.

It’s believed the vandalism went down sometime between midnight and 8 a.m. Sunday, when it was reported to police.

NYC Mayor Bill DeBlasio tweeted: “Defacing a sukkah is unacceptable and an attack on our city’s values. If you have any information on this act of vandalism, please contact the NYPD.” 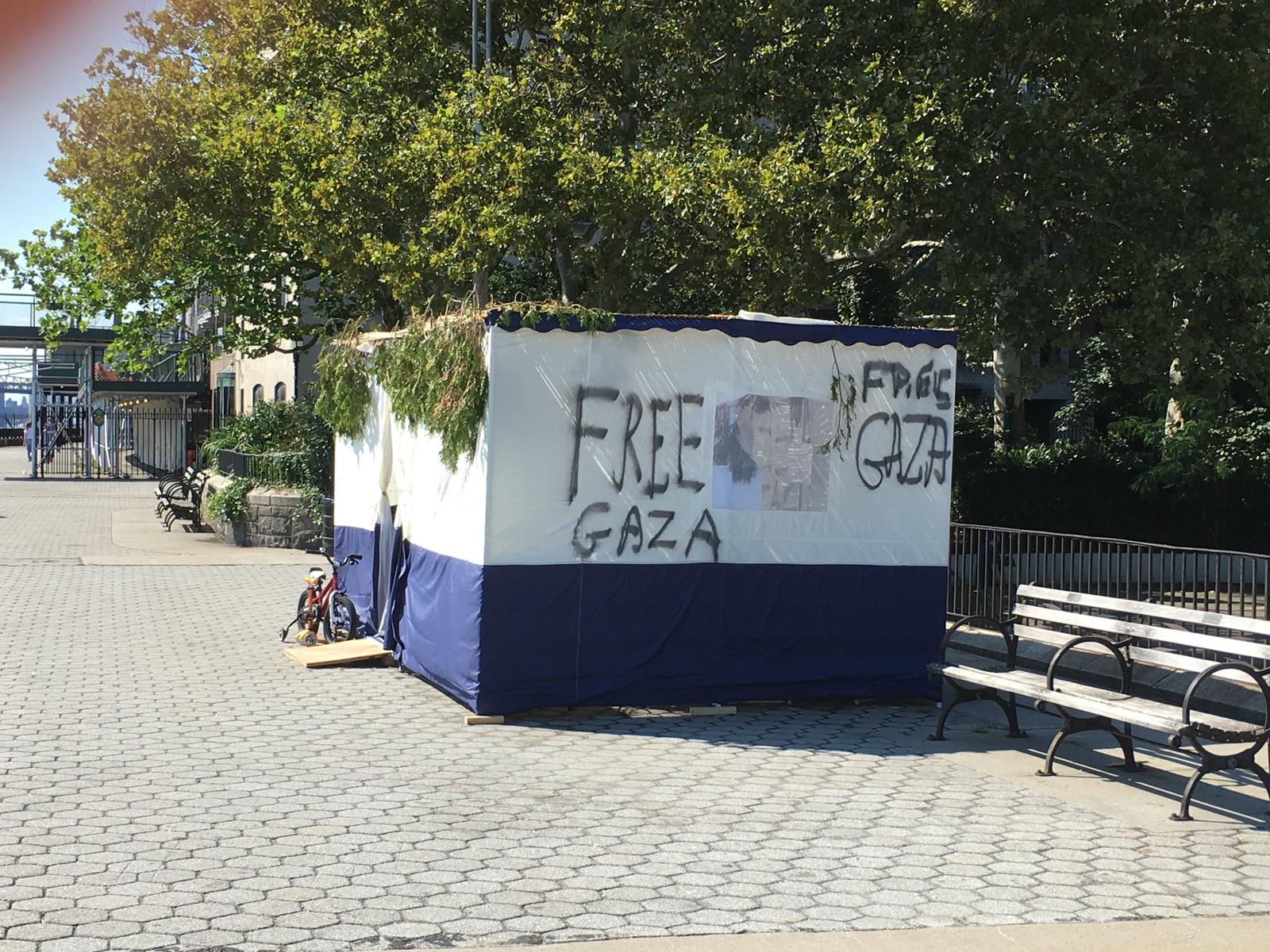 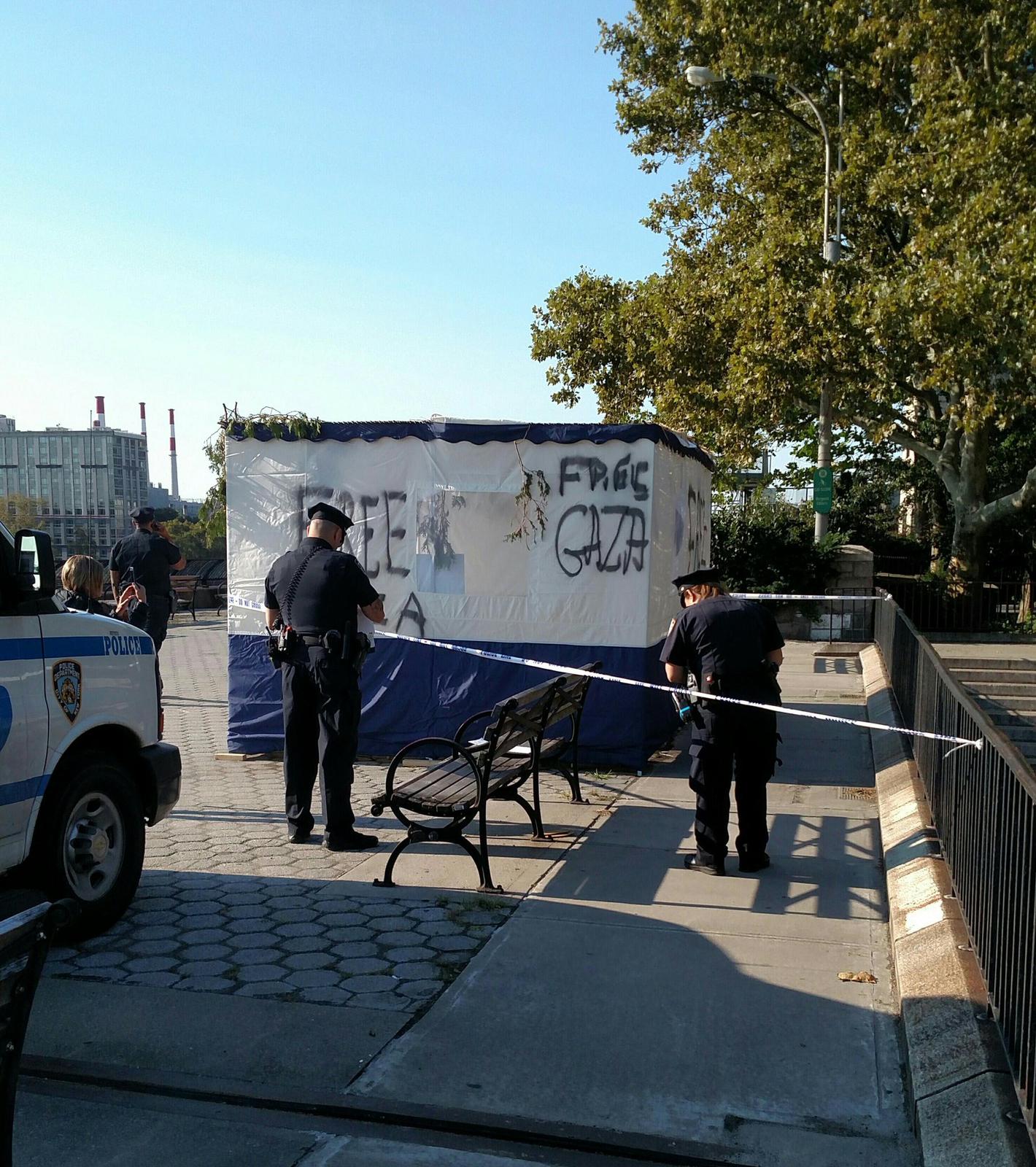 Chabad of UES’s Sukkah was vandalized!
“This hate has no place in our city, that’s why we are responding with love, light and pride. That’s why we are taking the Torah scrolls out to the street tomorrow night and invite the entire community to dance with us!” – Rabbi Krasnianski pic.twitter.com/YQ3o3YQ8JX

Appalled by images of a vandalized Sukkah in Carl Schurz Park in #NYC this morning. Targeting a premises used for religious purposes during the #Jewish holiday of Sukkot is simply beyond the pale. Thankful to @NYPDnews for swiftly being on the scene & investigating. pic.twitter.com/w9V3ROF9vB

Our Parks will continue to host Sukkot, Hanukkah, & all other holidays. That was this morning by the Mayor’s home, but hate won’t win! 🔯 pic.twitter.com/MhLcp00fnb

The bigots always say we are not anti-Semitic we love Jews we just hate Israel. Vandalizing a Succah with “Free Gaza” exposes that lie.
Anti-Semites hate Jews, Israelis, Israel and anyone & anything connected to us. Hate is hate. https://t.co/kaeJzAZGG1