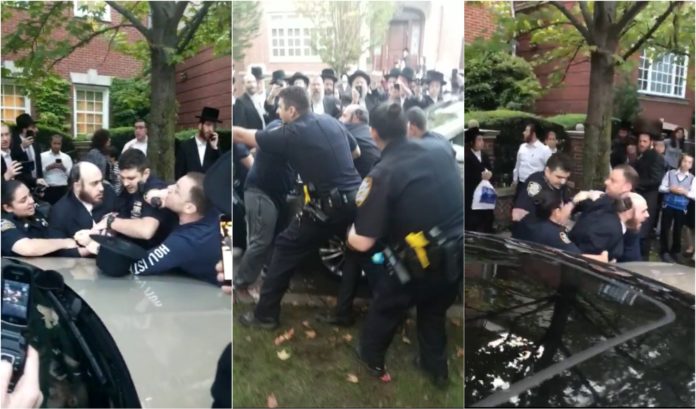 A Hachnosas Sefer Torah in Boro Park on Sunday afternoon ended in chaos and at least one person arrested.

Sources tell YWN that at around 6:00PM, hundreds of people began a procession accompanying a new Sefer Torah to the Dzebo Bais Hamedrash. There was apparently no permit issued for a street closure, and police responded due to massive traffic in the area.

As can be seen in the attached video footage, numerous NYPD vehicles responded to the vicinity of 16th Ave & 51st street and ordered the pedestrians onto the sidewalks in an attempt to open the street.

Several individuals intentionally ignored police, prompting officers to get out of their vehicles and physically move the protestors. At least person was arrested.

The NYPD called for a Level 1 Mobilization Response, prompting dozens of officers to respond.

It should be noted that there are no legitimate permits issued for Hachnosas Sifrei Torah. A phone call is made to the Community Board who coordinates it with Shomrim and informs the NYPD of the event. In this particular incident, the Community Board was never contacted, for unknown reasons.

A group of around 100 Bochrim staged a small protest outside the 66 Precinct on 16 Avenue, while community activists worked behind the scene to defuse the situation.

The man was released at around 9:30PM as the crowd cheered and sang as he exited the Precinct.

YWN ADDS: While the police response and actions can be called “police brutality” or “excessive force”, instead the angry group of pedestrians appallingly began chanting “Nazi” at the NYPD Officers – once again demonstrating that many members of the Jewish community haven’t a clue who the Nazis were. These people are simply trampling on the names of the 6 million Kedoshim HY”D. The people quick to use the word Nazi today, have obviously no clue – just as an example – what took place in just one day at Treblinka.

UPDATE: The Hachnosas Sefer Torah was allowed to continue, as can be seen in the video below:

VIDEO OF SMALL PROTEST OUTSIDE PRECINCT

VIDEO OF ARRESTED PERSON BEING RELEASED

VIDEOS: The man arrested at the shut-down Hachnosas Sefer Torah in #BoroPark was released from the #NYPD’s 66th Precinct, greeted by several dozen cheering spectators and protesters

Do you know what Nazis are? Murderers innocent people! Comparing NYPD to Nazis is sickening. Whoever participated in that vile chant should educate themselves on what the Nazis did & apologize immediately to @NYPD66Pct officers who have an excellent relationship w/ our community pic.twitter.com/vd0ds0aepV

I met earlier with the individual arrested at a Hachnosas Sefer Torah by officers from the 66th Pct. He is now safe at home. I was at the precinct tonight; there are still many unanswered questions about the intensity of the police response to a peaceful community celebration.

I said “intensity,” not “insanity.” There are legitimate questions about whether whatever occurred merited the heightened police response.

I’m concerned about the arrest of one of our citizens, but let’s not jump to conclusions just yet, I’m urging everyone to exercise restraint, we will get to the bottom of what happened.