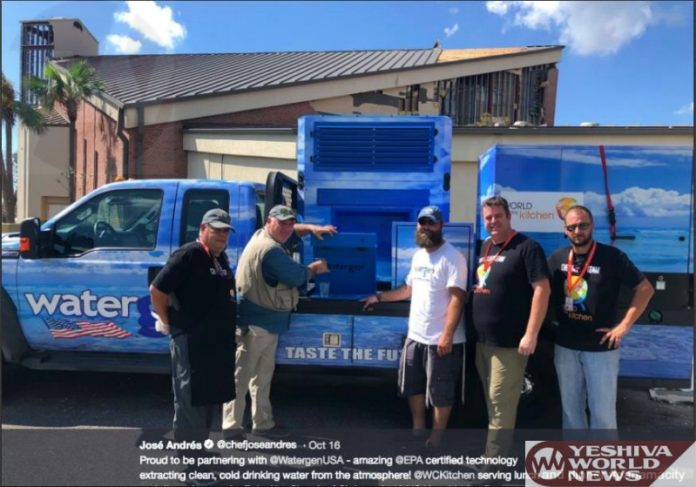 “When I was a boy and I would see scary things in the news, my mother would say to me, “Look for the helpers. You will always find people who are
helping.” Mr. Rogers

Let’s take a look at some of the helpers.

• The University of Florida college kids.
• Chabad Rabbis at the student center. (Chabad: one of the world’s best known Hasidic Jewish movements well known for its outreach)
• They are Watergen-Usa, the innovative technology company from Israel that creates clean water from air.

Hurricane Michael, a category 4 storm, tore through Panama Beach and brought widespread devastation to a once peaceful beach town in Florida.

Along with that, came the critical need for clean water, medical supplies, and food.

Watergen-USA stepped up and provided a truck that makes clean, fresh water from the air.

Jewish College students of all denominations, and the Chabad Rabbis running a Chabad student center at the University of Florida worked together. They loaded the atmospheric water generation truck with medical supplies and ready to eat meals, and headed down to Panama Beach.

Yet that’s not all they and other volunteers provided. They provided the residents and business owners with faith in the goodness of strangers in a time of need.

Mr. Michael Mirilashvili, President of Watergen Ltd. says, “It’s an incredible opportunity to use our remarkable Israeli technology to save American lives.” He believes in the concept of Tikkun Olam (A Jewish concept defined by acts of kindness performed to perfect or repair the world).

“After disasters, our technology enables us to enter an area and provide water to the people without any need to re-supply. No more plastic bottles. Watergen USA is working to save peoples lives,” Watergen USA President Yehuda Kaploun said.

“My shop is down, [but] I’m not in bad spirits,” said one business owner. “This just made my faith grow.”

“The people who came, that was the biggest blessing to us,” he said. “I didn’t see nobody in panic mode. Nobody was in tears about being hungry.”

The residents and rescue workers are faced with the constant need for clean water, along with having to figure out how to start rebuilding their lives.

• They need photo ID to return to their homes according to the city’s Facebook page.
• Many have no electricity, unable to avoid the stifling heat, which city officials hope to have up and running within weeks.
• Fuel, water, and food are hard to come by in the hardest hit areas.

President Trump came by to witness the devastation and made a disaster declaration in nine Florida counties.

Schools are in ruins, businesses have been wiped out by the hurricane, and rescue attempts have been challenging due to the enormous amount of debris and ruined roads, making transportation difficult in the area.

Chef Jose Andres partnered with Watergen USA to use water from their truck.

Resident Joe Bush says he’s lived in Mexico Beach, Florida for 19 years, and loves it. But after surveying the damage inflicted by Hurricane Michael, he’s decided to move away.

Randy June is another resident, yet he plans to move back. ”We ain’t going nowhere. We’re going to rebuild somehow. I just don’t know how yet.”

While canine teams look for survivors, the Chabad Rabbis led the college students arriving with the Watergen truck and supplies to serve those in need.

Nachshon Woodworth from Watergen USA who led the efforts in Panama City said that it was very hard to see the devastation, but very rewarding to help people who needed water.

“Volunteers do not necessarily have the time; they just have the heart.”