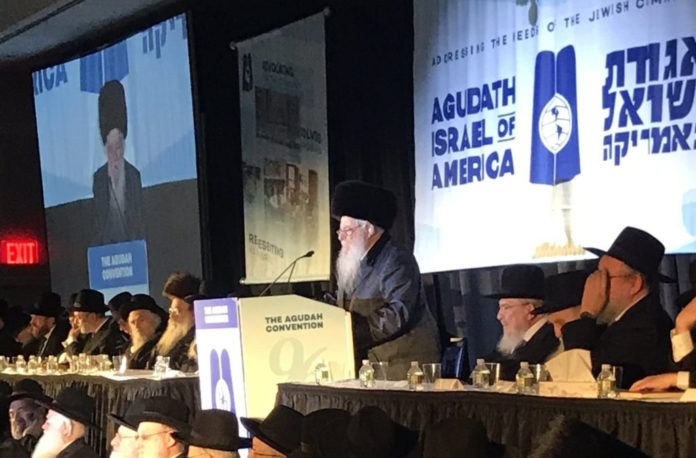 During the Keynote Session at the annual Agudah Convention on Motzei Shabbos, the Rosh Agudas Yisroel, the Novominsker Rebbe spoke out about the Machlokes in Eretz Yisroel regarding the issue of “Giyus”.

The Rebbe, Rav Yaakov Perlow, spoke in a pained voice, as he made a public Ma’cha against those using the issue to create Pirud, a split, among the Chareidi community in America.

His words were followed by a powerful Drasha by HaRav Boruch Mordechai Ezrachi from Eretz Yisroel, who slammed those who question the decisions that were made by Maran Rav Shteinman ZATZAL and YB”LCT the Sa’ar HaTorah, Hagaon HaRav Chaim Kanievsky and Hagaon HaRav Gershon Edelstein.

The Rebbe issued a disclaimer that he is not speaking on behalf of Agudas Yisroel, but only stating his own opinion, as well as in the name of Hagaon HaRav Shmuel Kaminetzky, the Rosh Yeshiva of Philadelphia and member of the Moetzes Gedolei Hatorah.

About five minutes into his speech, the Rebbe said he wished to respond to an earlier remark from the Lakewood Rosh Yeshiva, that in Eretz Yisroel there are “Chilukei Deos” (differences of opinion) that all need to be validated, and that “nobody can feel that he is being pursued by the other party.”

But the Rebbe said that “as an individual I would say that that is not the nekudah.”

“There’s one basic nekudah (point) here, and its not a question of the chok hagiyus (IDF draft law). It’s a question of a hanhagah (approach) that the overwhelming majority of the Olam haTorah has accepted from the days of Rav Aharon Leib [Shteinman] ZATZAL, to Rav Gershon [Edelstein] and the Sar HaTorah of our day, Rav Chaim Kanievsky – es chapt ah tzitter (one shudders) when one speaks about him.

“And yet there is a miyuta demiyuta (tiny minority) of people obstinately refusing to accept that hanagah, and that’s where all the problems come from, and that’s the real issue.”

“No one has a right to bring this Machlokes to America”, said the Rebbe.

The Rebbe added that he came to the convention intending to “not speak a milah achas (one word) about what is happening in Eretz Yisroel,” but he felt it was necessary to make this point clear.

In his riveting remarks, Rav Boruch Mordechai Ezrachi said: “A generation needs a leader and Boruch Hashem, our generation is blessed. It’s a zechus to live a world in which he reigns”, (referring to Hagaon HaRav Chaim Kanievsky).

Watch the Rebbe’s remarks in the video below.