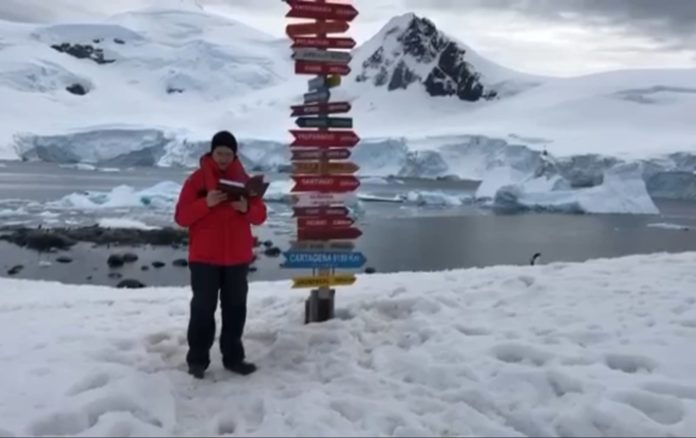 A group of Jewish adventure seekers are concluding an 11 day cruise to Antarctica, home of the penguins, during which they celebrated what have been the first ever Siyum Masechta on the continent.

The trip was organized in part by the Dan’s Deals website, which is owned by Chabad Chassid Daniel Eleff. The advertisements for the trip generated a lot of attention, and in the end, 51 religious Jews from more than a dozen cities around the world signed up for the excursion, which included sailing to the south pole.

The “once-in-a-lifetime opportunity” promised to feature “walking among thousands of penguins, zodiac cruising between towering icebergs, and watching whales breaching and seals hunting. Guided hikes, snowshoe up mountains and stunning views that few have ever seen.”

The group consisted of Jews with a diverse range of backgrounds, hailing from Israel, Europe and the United States. CEO of Beth Medrash Govoah (BMG) in Lakewood, Rabbi Aharon Kotler, was one of the participants on the voyage.

The unique trip created a lot of Halachik quandaries the travelers, including how long they should fast for during Asara B’Teves this past Tuesday.

As there was no kosher food at the particular port of call, all of the kosher food had to be loaded onto the boat at a previous port in Canada.

Shabbos presented a difficulty for the Jewish travelers, requiring them to find a cruise that set sail at least three days prior to Shabbos. They also had to make sure that the majority of people traveling on the boat were non-Jews so as to allow for the ship to continue sailing even on Shabbos. There were also secular Jews on the trip which made the the voyage even more problematic from an halachik perspective. There were also instances when the sun didn’t set at all, and therefore there were questions as to when Shabbos was supposed to be marked.

Thus, it was decided that participants on the sailing expedition would have to fast for 24 hours straight for Asara B’Teves on Tuesday, as the sun did not set until 24 hours after it rose.

Members of the trip merited a few major accomplishments in Yiddishkeit. The first of which was that the first ever Minyan on the continent of Antarctica was held. This went together with the printing of the Sefer Tanya which fulfilled the wishes of the Lubavitcher Rebbe Z”L who had asked that the book should be printed in every spot in the world.

Finally, as can be seen in the video above, the group celebrated the Siyum of Mashechta Taanis, made by a participant of the trip while in Paradise Harbor, Antarctica.