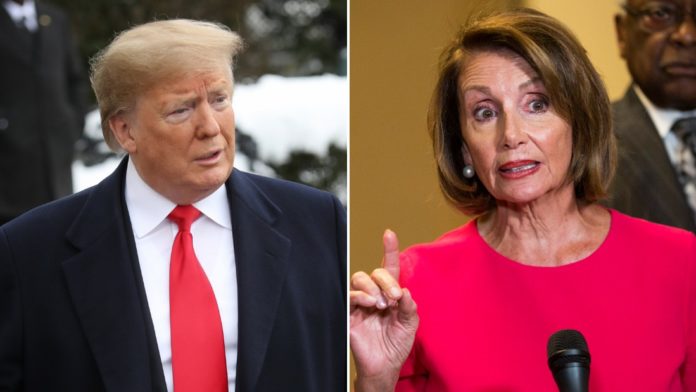 Democrats controlling the House have teed up a vote next week to block President Donald Trump from using a national emergency declaration to fund a wall along the U.S.-Mexico border, accelerating a showdown in Congress that could divide Republicans and lead to Trump’s first veto.

The Democrats introduced a resolution Friday to block Trump’s declaration, and House Speaker Nancy Pelosi, D-Calif., said the House would vote on the measure Tuesday. It is sure to pass, and the GOP-run Senate may adopt it as well. Trump quickly promised a veto.

“Will I veto it? 100 percent,” Trump told reporters at the White House.

Any Trump veto would likely be sustained, but the upcoming battle will test Republican support for the president’s move, which even some of his allies view as a stretch — and a slap at lawmakers’ control over the power of the federal purse.

A staff aide introduced the measure during a short pro forma House session in which Rep. Don Beyer, D-Va., presided over an almost-empty chamber.

“What the president is attempting is an unconstitutional power grab,” said Rep. Joaquin Castro, D-Texas, the sponsor of the resolution, on a call with reporters. “There is no emergency at the border.”

Trump’s declaration of a national emergency gives him access to about $3.6 billion in funding for military construction projects to divert to border fencing. But the administration is more likely to tap funding from a federal asset forfeiture fund and Defense Department anti-drug efforts first.

Trump’s edict is also being challenged in the federal courts, where a host of Democratic-led states such as California are among those that have sued to overturn Trump’s order. The House may also join in.

Pelosi said the House measure would “reassert our system of checks and balances.”

For Democrats, the vote is another chance to challenge Trump over funding for a border wall, the issue that was central to the 35-day government shutdown. It also puts some Republicans from swing districts and states in a difficult spot, as many have expressed misgivings about Trump’s action despite their support for his border security agenda.

Should the House and the Senate initially approve the measure, Congress seems unlikely to muster the two-thirds majorities in each chamber that would be needed later to override a Trump veto.

The measure to block Trump’s edict will be closely watched in the Senate, where moderates such as Susan Collins, R-Maine, and Lamar Alexander, R-Tenn., have signaled they would back it. Senate Majority Leader Mitch McConnell, R-Ky., is only a reluctant supporter of Trump on the topic.

Trump’s GOP allies promised they would uphold any veto denying Democrats the two-thirds votes required to overcome one.

“Democrats’ angst over Congress’ power of the purse is unwarranted, especially since the commander in chief’s authority to redirect military funds for a national emergency is affirmed in a law passed by their own branch,” said top House Judiciary Committee Republican Doug Collins of Georgia.

Pelosi wrote in a letter to her fellow lawmakers that the Republican president’s “decision to go outside the bounds of the law to try to get what he failed to achieve in the constitutional legislative process violates the Constitution and must be terminated.”

The battle is over an emergency declaration Trump issued to access billions of dollars beyond what Congress has authorized to start erecting border barriers. Building his proposed wall was the most visible trademark of Trump’s presidential campaign.

Besides signing the bill, Trump also declared a national emergency and used other authorities that he says give him access to an additional $6.6 billion for wall building. That money would be transferred from a federal asset forfeiture fund, Defense Department anti-drug efforts and a military construction fund. Federal officials have yet to identify which projects would be affected.

Castro, the resolution sponsor, said that he has already garnered support from a majority of the House as co-sponsors and that he has at least one GOP sponsor, Rep. Justin Amash of Michigan.