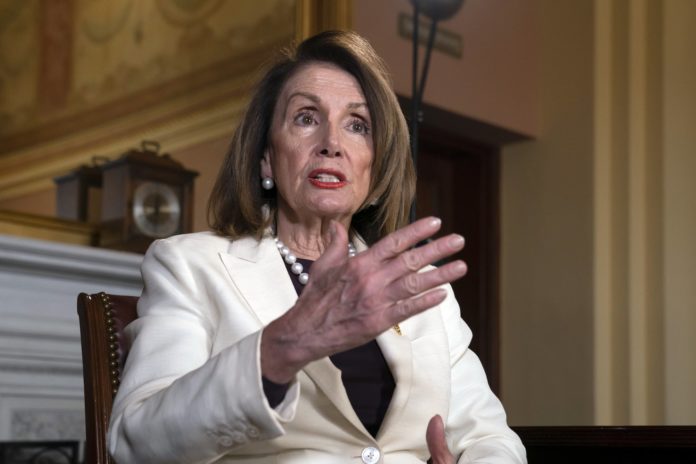 In a wide-ranging interview with The Associated Press, the California Democrat said she was “very concerned” about Barr’s handling of special counsel Robert Mueller’s report on Russian meddling in the campaign and accused Barr of doing Trump’s political bidding in his testimony at a Senate hearing.

Pressure is mounting on the attorney general in the days before his release of a version of Mueller’s nearly 400-page report, and Pelosi amplified the demands from Capitol Hill to see the full document. Barr said Wednesday he expects to release a redacted version within a week. Pelosi said it’s only a “matter of time” before the full report is made public.

During Pelosi’s 30-minute interview in her Capitol Hill office, she took stock of the Democrats’ first 100 days as the House majority in the new Congress. And despite harsh words for Trump and his advisers, she still spoke hopefully of working with him on key issues — including lowering prescription drug prices — where the two share common goals.

At the same time, Pelosi vowed to keep up relentless Democratic oversight of the administration. And she did not fully close the door on impeachment proceedings, despite having recently dismissed efforts by liberal colleagues by saying Trump’s “not worth it.”

“My view is that impeachment is very divisive in the country, and when we see what we need to see it may be imperative that he be impeached. But up until then, he’s not worth it,” Pelosi said.

Much will hinge on Mueller’s findings, putting the attorney general’s credibility increasingly on the line.

Barr testified Wednesday before a Senate panel that he believes “spying did occur” on Trump’s 2016 presidential campaign, aligning himself more closely with the president’s views on the origins of the Russia investigation. Trump and other critics of the Russia probe claim that the precursor to Mueller’s investigation was launched during the Obama administration by officials abusing their surveillance power. Mueller was appointed special counsel by Trump’s Justice Department.

Barr didn’t present evidence to support the assertion and later in his testimony appeared to backtrack, saying he wasn’t certain that any wrongdoing occurred and was only interested in ensuring proper procedures were followed.

Pelosi said Barr’s comments undermine the Constitution and his role in the Justice Department.

As House Democrats pursue oversight of the Trump administration beyond the Mueller probe, Trump has complained that Democrats will never be satisfied. He and his allies call it presidential harassment.

Asked what would satisfy Democrats, Pelosi said: “I’ll be satisfied when we have a new president of the United States who is a Democrat.”

As for the Mueller report, Barr’s four-page summary of its main conclusions said the president was not exonerated by the special counsel. Mueller left open the question of whether Trump obstructed justice during the two-year probe of Russian interference in the 2016 election. Barr and his team at the Justice Department made their own decision to clear the president of criminal wrongdoing.

Pelosi said anew on Wednesday, “Let us see the report.”

“The fact is the president has engaged in activities that are unethical, un-American. … In every way he is unfit to be the president of the United States,” she said.

“Is that an impeachable offense? Well it depends on what we see in the report. I set a very high bar for impeachment because I think it’s very divisive in the country and one of our purposes is to unify, as our founders gave us guidance, e pluribus unum, from many one.”

Republicans say Pelosi is under great pressure from her liberal flank, including young colleagues such as Rep. Alexandria Ocasio-Cortez, but the speaker who has represented San Francisco for 30 years scoffed.

“I am from the left,” she said. “I’m a progressive Democrat from San Francisco … and I’m proud of who I am.”

As the new Congress rounds out its 100-days milestone, the speaker said Democrats are doing far more than conducting oversight of the White House, even though she said that’s their constitutional responsibility as an equal branch of government.

Though female candidates and voters helped usher Democrats to the majority, Pelosi said she’s not insisting on having a woman — or two women — on the party’s 2020 presidential ticket.

“Would I like to see one? Yes,” she said. “But it doesn’t mean that if there isn’t one … that it’s not a ticket that we should all get behind.”

She said she prefers to keep the House focused on pocketbook issues for everyday Americans — lowering health care costs and investing in infrastructure — and new ethics rules, not on Trump.

“We are not just focusing on him,” she said. “We’re focused on what we said we would do.”