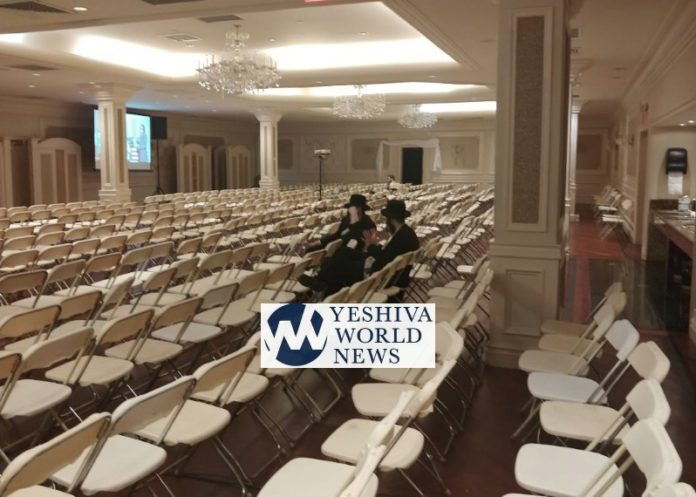 As of 9:30PM ET, a whopping 50 anti-vaxxers have shown up at the anti-vaccination symposium at Ateres Chynka Hall in Flatbush. The event was called for 8:00PM, with “buses leaving Williamsburg every 10 minutes”.

With the NYPD standing guard outside, and with the media outside filming, the overflowing crowd of brave anti-vaxxers have shown up to hear dishonest conspiracy-theorist William Handler preach to them.

The anti-vaxxers were expecting to charge $12 admission to 1,300 people to cover the expense for the hall, the sound system company, massive screens, cars with loudspeakers riding around Flatbush, Boro Park, and Williamsburg announcing the event; the harassing robocalls made to tens of thousands of phone numbers, the signs hung on street-poles, and other expenses.

Hopefully, those people were all paid in advance… 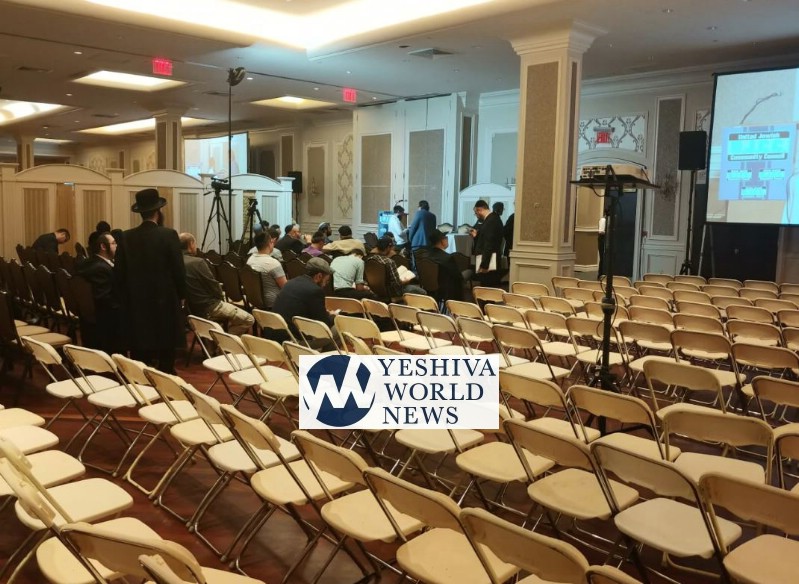 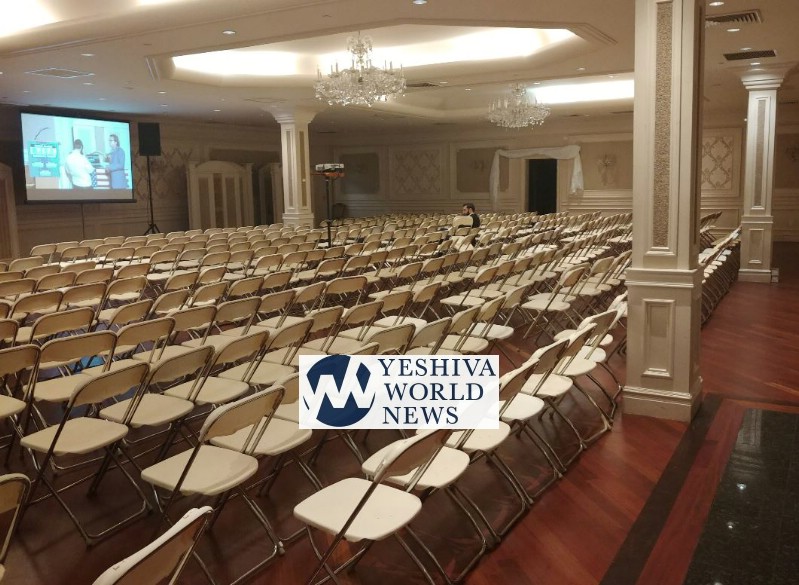 WATCH: A look inside the ANTI-VAXXER symposium in #Flatbush on Tuesday night. There looks to be under 200 attendees, with 1000+ empty seats. Those who attended reportedly heard "Rabbi" William Handler [seen serenading the crowd in the 2nd video] quoting the Gospel of Luke: “Father, forgive them, for they know not what they do!” he cried, reciting the Gospels nearly verbatim in referring to advocates of #vaccination. The bulk of the program was led by Del Bigtree, a Hollywood producer without medical qualifications who styles himself as an expert on #vaccines. . Bigtree led the audience through a text-heavy PowerPoint presentation claiming that vaccines have led to a rise in autism among children — claims that have been rejected by every mainstream medical or public health group. . In dramatic fashion, Bigtree talked about the “exploding cases of diabetes” (linked, in his mind, to vaccines), drawing out the word “explooooding” while violenty shaking his body for extra effect.

As YWN has been reporting, Flatbush was bracing for another epic Chillul Hashem by the anti-vaxxer cult and its guest speaker, dishonest conspiracy-theorist William Handler of Boro Park, who seems to be the Rabbi of the cult.

Many have been protesting this scheduled event by contacting the hall and voicing their outrage. Ateres Chynka says they were misled and was told by those renting the hall that this was some type of “Chinuch” event, and were never told that this was an anti-vaxxer event.

The FJCC has consulted with Rabbonim and Roshei Yeshiva in Flatbush, including Rabbi Elya Brudny, Shlita, Rabbi Yisroel Reisman, Shlita, Rabbi Moshe Tuvia Lieff, Shlita and many others, about the anti-vaccination event scheduled for tonight in Flatbush. Under their guidance we release the following statement:

The Flatbush Jewish Community Coalition expresses our grave disappointment and dismay with the organizers and hosts of tonight’s anti-vaccination event. The Flatbush community does vaccinate. The religious and lay leaders of our community are unanimous in encouraging vaccination.

We resent that participants are being bussed in from other neighborhoods. Our community will not participate.

While the Flatbush community and its Yeshivas have not suffered a measles outbreak, we do suffer from the anti-religious backlash caused by the ignorant few who tarnish our good name.

We beg you – stay in your own neighborhoods and out of Flatbush. The charlatans who will present tonight do not reflect the sentiment of the Flatbush Jewish Community.

YWN notes that William Handler previously spoke at another anti-vaxxer event in Rockland County, and made national headlines. The event caused such a Chillul Hashem, that both Satmar as well as Agudath Israel of America both issued statements of condemnation against Handler. Satmar of Williamsburg went so far as to place a full page proclamation in their weekly newspaper “Der Yid” slamming Handler.

Previously, YWN noted that Handler claims to speak in the name of Hagaon HaRav Avigdor Miller ZATZAL, when in fact, YWN has confirmed with his children and grandchildren that he does not speak for them in any way shape or form. 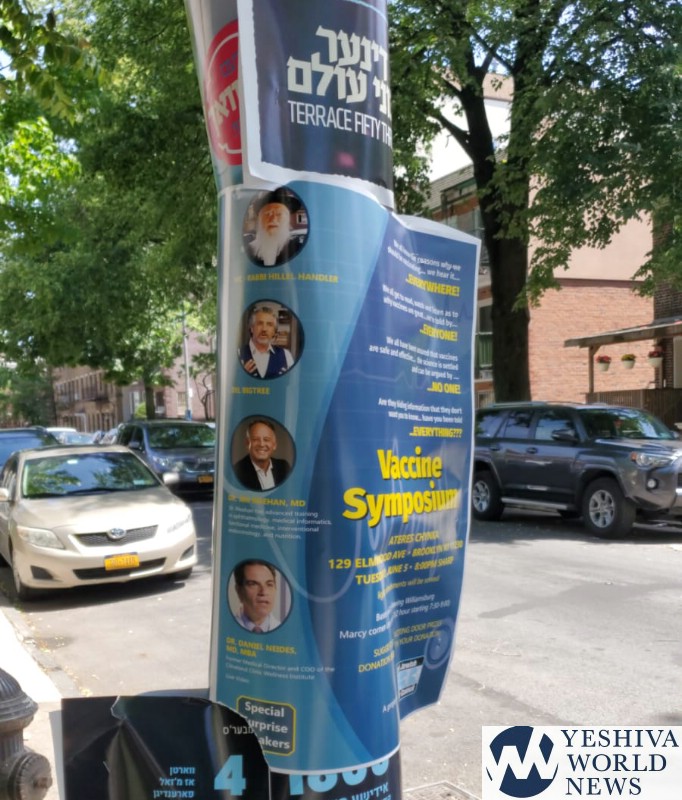 To hold an anti-vaccination rally in the middle of an outbreak is beyond irresponsible, it is downright dangerous. pic.twitter.com/TCL2aijfHF

LOO: Lev Bais Yaakov in #Flatbush takes a bold and commendable move of asking their entire parent body to call Ateres Chynka hall and voice their outrage and pressure them to cancel an anti-vaxxer event scheduled for Tuesday night

Also this is the most disturbing flyer being handed out. pic.twitter.com/EJTJ6Nl1Hq

Deleted an earlier tweet of young woman who said her family was gonna kick her out of the house. — she was one of several who spoke about being intentionally exposed to measles.

PERP WALK: One of the few attendees at the anti-vaccination event in Ateres Chynka cover their faces to avoid being seen by crowds of spectators outside the hall #Flatbush #BoroPark #Brooklyn