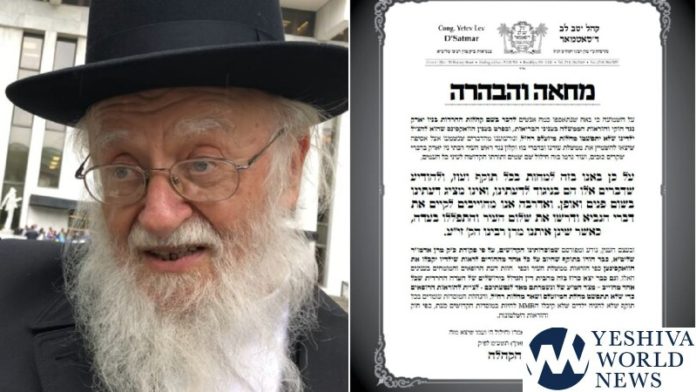 Recently, hundreds of anti-vaxxers gathered at an event in Monsey. Lacking any legitimate Rabbonim to address the gathering, the audience was privileged to hear from a dishonest conspiracy-theorist claiming to be a Rabbi.

Khal Yetev Lev D’Satmar, the main Satmar congregation located in Williamsburg, issued a declaration – published in today’s issue of Der Yid – condemning in the strongest possible terms the inflammatory, misguided and wrong rhetoric by Rabbi Hillel Handler at the anti-vax symposium. The congregation further declared that the Rebbe has ordered everyone to vaccinate.

This declaration, published in this week’s Der Yid, is an unprecedented rebuke of the anti-vax movement, coming from the largest Chasidic community and publicizing the Grand Rebbe’s directive to vaccinate. It’s also very significant, since some reports depicted Handler as being affiliated with Satmar. In fact, he has no role in the Satmar community.

Below is a full translation of the Congregation’s letter:

Regarding the reports that many people gathered to speak in the name of the New York Haredi communities against the laws and government directives regarding health, and especially regarding vaccines to save our kids that the measles the disease shouldn’t spread – Go-d forbid – and we were shocked by the words at this gathering to attack our city government and shaming and fighting words against the mayor of our great city New York full of lies and falsehoods, and they also cause a chilul hashem (defamation of G-d’s name) and his Torah in the eyes of the nations,

Therefore, we are condemning in the strongest terms, and we are announcing that these words are against our position, and it doesn’t represent us in any way or form. To the Contrary, we are obligated to follow the words of the prophet that you should ask for the wellbeing of the city and you shall pray for it, as our holy Rebbe OBM constantly guided us.

And to the core of the matter, it’s widely known that our holy mosdos (school system), following the directives of the Rebbe Shlit”a, issued strong instructions that parents must have their children vaccinated in accordance with the city government’s orders and in accordance with the advice of doctors and experts in these matters. The great Beth Din of Yerushalayim Edah HaCharedit also issued a public directive that everyone must – because of the Mitzva of Vnismartem M’eod L’nafshoseichem (the Torah commandment to protect yourself) – to listen to the advice of doctors in order that the measles and other illnesses shouldn’t spread, Go-d forbid. The administration of our schools are standing guard that children that do not have the MMR vaccine should not be in our schools now in accordance with the law and the government advisories.

We are signing with anguish regarding the words that were said and the resulting chilul hashem.

YWN NOTES: William Handler also claims to speak in the name of Hagaon HaRav Avigdor Miller ZATZAL, when in fact, YWN has confirmed with his children and grandchildren that he does not speak for them in any way shape or form. 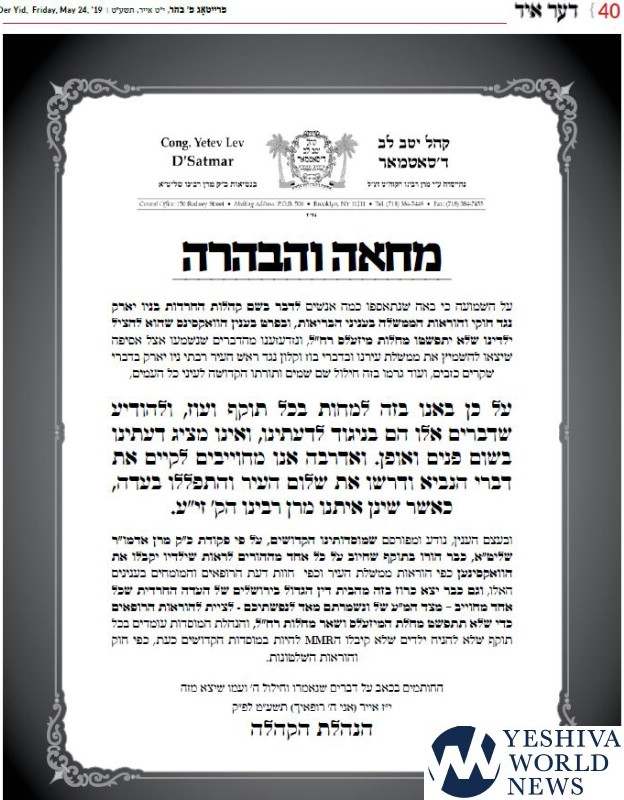 The Agudath Israel of America also condemned Handler in a recent statement:

Countless rabbinical figures and leaders, including leading rabbis in the Agudath Israel movement and doctors serving these communities, have repeatedly encouraged vaccination in the strongest possible terms.

A recent gathering in Monsey, NY, heavily promoted in Orthodox Jewish areas, featured figures in the anti-vaccination circuit, including a pediatrician who uses “cranial-sacral therapy, homeopathy, essential oils, aromatherapy, yoga, Reiki, meditation, reflexology, and mindfulness”; a television producer who has sported a large yellow star at anti-vaccination rallies; and the author of a paper in the Lancet on vaccines that the publication retracted as fraudulent. The latter lost his British medical license for unethical behavior.

Of particular concern to us were assertions made by a presenter speaking as a rabbi, a long-time agitator on behalf of controversial causes. In the past, the speaker has likened vaccination to “child sacrifice” and, at the recent gathering, he accused New York City Mayor Bill de Blasio of scapegoating Hasidim, being “a very, very sneaky fellow” and of having German heritage.

The speaker also blamed concern over the appearance of measles in Orthodox communities on an effort to “to distract from the virulent diseases that are sweeping through the city from illegals.”

His assertions are nonsense, and his personal attack on Mayor de Blasio is deeply offensive. It is unfortunate that he was allowed to share his imaginings with others.