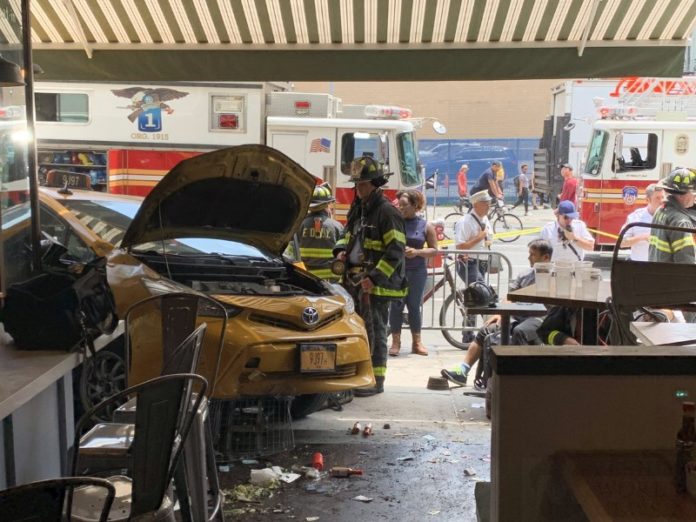 Six people were injured when a taxi crashed into a restaurant in Hell’s Kitchen Thursday afternoon.

Some of the victims were sitting outside of the restaurant.

There is no apparent structural damage to the restaurant.

Firefighters and EMS are still operating at the scene and the cause of the crash is currently unknown.

The extent of the injuries is currently unknown.

Six people were injured when a taxi crashed into "Westville Restaurant" in on 9th Ave in #HellsKitchen Manhattan just after 12:30PM, the FDNY said. Injuries were non-life-threatening – Photo via @hordie pic.twitter.com/hNvEIP5Lxt

BREAKING: An out of control taxi jumped a curb outside a restaurant on 9th Avenue. It happened at the peak of lunchtime at around 12:40p.

I am told by an employee that patrons started running and then they heard a huge crash. @PIX11News pic.twitter.com/FrSXBrFZ6D

#FDNY is operating on scene of a vehicle into a restaurant at 811 9th Ave Manhattan. Members are currently evaluating six civilians with non-life-threatening injuries.

So evidently a taxi drove into the restaurant where I had lunch yesterday 😱😱 pic.twitter.com/Kz0aQ70n2a