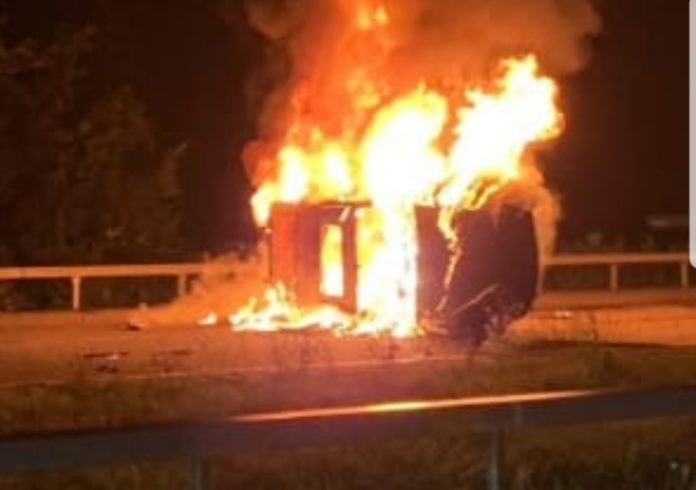 It happened at around 11:40PM near Exit 129 heading westbound in the Blooming Grove section of Orange County.

Shocking footage showed the vehicle on its side totally engulfed in flames. Three victims were critically injured. Three choppers were requested to airlift the victims to trauma centers. The helicopters landed on the highway.

At least 6 Paramedics from Kiryas Joel Hatzolah were on the scene treating the victims.

The NY State Police tells YWN that an investigation revealed that a 2003 Chevy Trail Blazer was traveling west on State Route 17 when the vehicle left the roadway on the north shoulder. The vehicle subsequently struck a guide rail, overturned and came to rest on its passenger side facing south across the westbound lanes and became engulfed in flames. All three occupants were ejected from the vehicle. The occupants of the vehicle were all transported to Westchester Medical Center. The operator of the vehicle, Wesley Smith, age 19 of New Windsor and his two passengers, Amber Santiago age 19, of Newburgh and Nageria Smith age 23, of Queens are all listed in critical condition.

This is an ongoing investigation and the State Police are asking anyone who may have witnessed the accident to contact the New York State Police Bureau of Criminal Investigation (BCI) at Monroe at 845-782-8311.