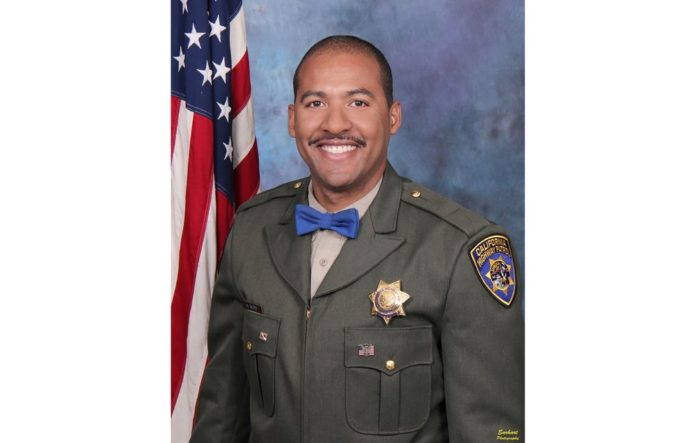 Bells tolled Wednesday during a solemn California Highway Patrol ceremony for an officer killed when a motorist he pulled over for a traffic stop grabbed a rifle and opened fire in a shooting rampage that wounded two more officers.

Authorities were still investigating what prompted Aaron Luther, 49, to shoot Moye and the other officers.

Moye had stopped Luther on a freeway in the Southern California city of Riverside on Monday, and officials have said he probably did not know that Luther had a long and violent criminal history.

“It’s obvious something triggered him to do this,” said Riverside police Officer Ryan Railsback. “We don’t know what that is.”

One of the wounded officers was still hospitalized Wednesday with what were described as critical injuries to one of his legs, though officials said he was alert and in stable condition. The other wounded officer was released earlier.

Moye, a motorcycle officer, was on a freeway overpass filling out paperwork to impound Luther’s pickup truck when Luther, who was outside the vehicle and not restrained, pulled a rifle from the truck and started shooting.

Moye, 34, was fatally wounded but called for help and two responding officers were shot in the legs while frightened motorists ducked for cover from dozens of flying bullets.

Officials have said public records showing peoples’ criminal history are not typically something officers have access to during traffic stops.

Highway patrol Inland Division Chief Bill Dance said it was not clear whether Moye asked a dispatcher for additional information about Luther, 49, who was convicted of attempted murder in 1994 and also had convictions for assault, domestic violence, unlawful possession of a firearm and battery.

Railsback said authorities searched Luther’s Beaumont home on Tuesday but he did not know anything was seized.

John Aresta, police chief in Malverne, New York, and a past president of the New York State Association of Chiefs of Police, said officers have almost no way of knowing drivers’ criminal history during traffic stops.

When officers request information about a vehicle license plate number, a report usually comes back listing the vehicle’s registered owner, if it’s been reported stolen and if the license has been suspended or revoked. For checks of driver’s licenses, Aresta said active arrest warrants may be available but “it’s not going to come up with a criminal history and it’s not going to come with an asterisk saying ‘bad guy,’” Aresta said.

Luther had a warrant dating from 2017 after he failed to appear in court to answer a misdemeanor charge of driving with a suspended or revoked license.

A warrant like that “doesn’t necessarily mean you’re going to jail in handcuffs,” Railsback said.

Luther was paroled from state prison in 2004 after serving about 10 years of a 12-year sentence for attempted second-degree murder with an enhancement for the use of a firearm, first-degree burglary and second-degree burglary, according to the California Department of Corrections and Rehabilitation.

Court records show Luther also was arrested in 2007 on felony assault charges and took a no-contest plea deal that sentenced him to 90 days in jail. He also was charged with multiple felonies in San Bernardino County and pleaded no contest in 2010 to assault with a deadly weapon, according to the Southern California News Group.

As a felon, Luther was not supposed to have a gun and his father, Dennis Luther, said he’s not sure how his son came to possess one. He said his son had struggled with drugs, was depressed and in pain from knee injuries that left him unable to work his construction job.