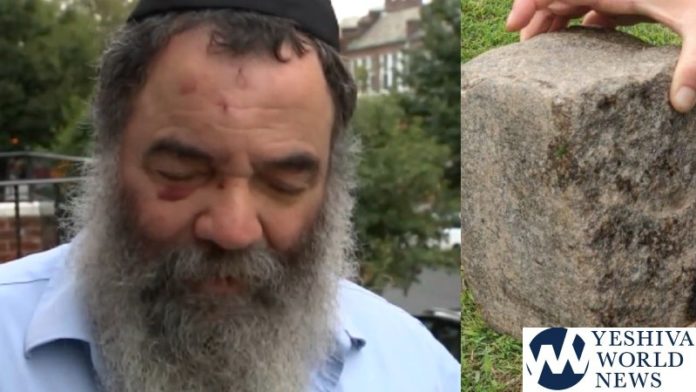 As YWN reported on Tuesday, the NYPD are looking for the man that attacked 63-year-old Rabbi Abraham Gopin at Lincoln Terrace Park in Crown Heights around 8:00AM, Tuesday morning. The attacker threw a large brick at the victim.

Gopin defended himself by punching back, but the attacker picked up another rock and threw it.

He lost two teeth and broke his nose in the attack, and received several stitches.

Talking to ABC News, Gopin says “he was going to kill me”.

See the videos below of various interviews given to the media.

Meanwhile, NY Governor Cuomo released a statement to YWN on Wednesday afternoon at 2:00PM – more than 30 hours after the brutal attack – condemning the assault, and offering his assistance.

“I am sickened to learn of the vicious attack on a Hasidic Jewish man in Lincoln Terrace Park in Brooklyn. This incident is unfortunately just the latest in a string of horrific anti-Semitic attacks happening across the state and the country – part of the cancer of division and hate that has been injected into the body politic of this nation.

“In New York, we have zero tolerance for bigotry and hate-fueled violence of any kind, and I am directing the State Police Hate Crimes Task Force to provide the NYPD with any resources necessary to investigate this incident and bring the individual responsible to justice.

“We stand shoulder to shoulder with the Jewish community – and any community targeted by such vile acts – and no matter what happens we will always stay true to our values of dignity and respect for every New Yorker.”