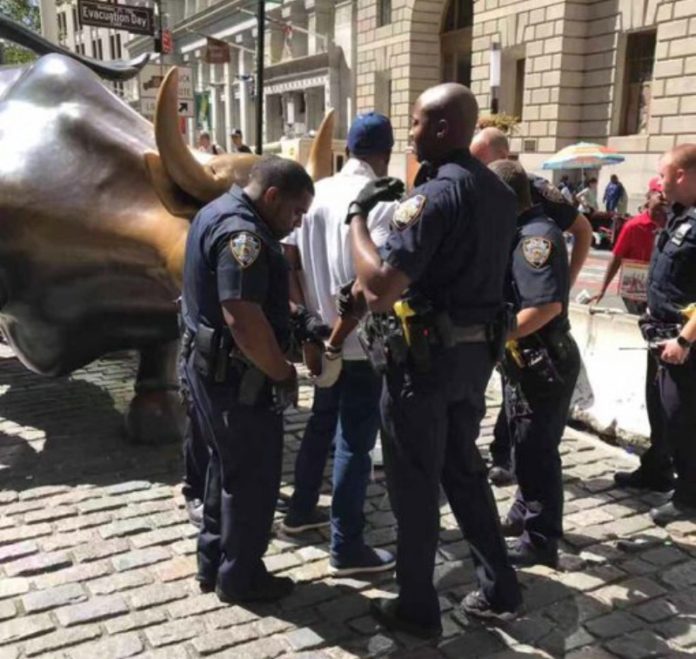 Police say a Texas man bashed New York’s Charging Bull statue with a metal object and damaged one of its horns.

Tevon Varlack, of Dallas, was arrested Saturday on charges of criminal mischief, disorderly conduct and criminal possession of a weapon for allegedly attacking the bronze beast.

Police says the 42-year-old Varlack hit the bull with a metal object that looked like a banjo. The attack left the statue with a hole in its right horn.

It’s not clear whether Varlack has an attorney who can speak for him.

The 7,100-pound (3,200-kilogram) bull was created by Italian-born artist Arturo Di Modica in 1989 and installed in lower Manhattan as a work of guerrilla art.

Di Modica says the sculpture was his gift to America. It quickly became a popular attraction.

Man arrested after he smashes a banjo (a solid one) into the Wall St charging bull damaging base of its horn….pic courtesy: SHIXIAO @ABC7NY @ABC7NYNewsDesk pic.twitter.com/KV8IA7BNxi

September 25, 2020 2:11 pm
7
LAKEWOOD NJ: COVID-19 cases have risen in Monmouth and Ocean counties over the last two weeks to levels not seen since New Jersey became a...

How It Happened: From Law Professor To High Court In 4...

How Trump, Biden Are Preparing For First Presidential Debate