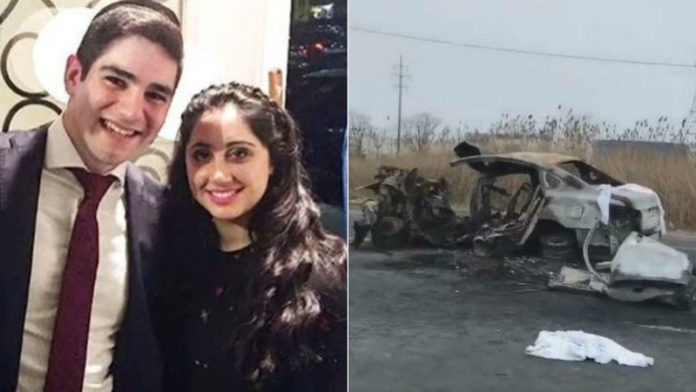 Opening statements began Tuesday in the trial of one of the drivers in a chain-reaction crash that killed newly engaged couple Yisroel Levin A”H & Elisheva Kaplan A”H.

The prosecutor says traffic camera video shows 35-year-old Rahmel Watkins driving recklessly on a wet, foggy road as he tries to pass his friend, Zakiyyah Stewart, while driving nearly 100 mph. He says the car lost control, crossed into oncoming traffic and into the couple’s car, killing them.

Watkins faces multiple manslaughter and other felony charges for the deaths of 21-year-old Yisroel Levin and 20-year-old Elisheva Kaplan.

Stewart was arrested and charged with DWI and being the under the influence of drugs. She pleaded guilty in February.

Watkins’ attorney says his client was just trying to avoid Stewart’s car. “It is a tragic set of circumstances between the speed, the weather conditions and the operation of the other driver who was under the influence of alcohol and marijuana,” he says. “That’s what caused this incident not because my client was driving at an excessive rate of speed despite what they claim.”

Officials say Watkins is being held on a $1 million bond.

The Nassau County prosecutor says the case is expected to last about two to three weeks.

The tragedy that occured left us all feeling broken. Remarkably, R’ Shaya Levin asked at the levaya that in exchange for their pure neshamos, there should be 10,000 shidduchim as a gift from Heaven. These words did not just inspire for a moment but rather it impacted an entire movement as it sparked the creation of 10K Batay Yisroel (10KBatayYisroel.org); an organization aimed at inspiring all of Klal Yisroel to join in making 10,000 shidduch suggestions leiluy nishmas Yisroel and Elisheva.

10K Batay Yisroel literally translates as: ten thousand Jewish homes, as the goal is to build thousands of Jewish homes. It can also be written as בתי’ ישראל, in memory of the home we lost, the home of Elisheva Basya and Yisroel.

As a Klal, let us make the extra effort to help the next person and show Hashem that we want to be the messengers of these 10,000 shidduchim and together make 10,000 shidduch suggestions in honor of Yisroel and Elisheva.

Suggestions should be logged on 10KBatayYisroel.org to be added to the ten thousand goal.