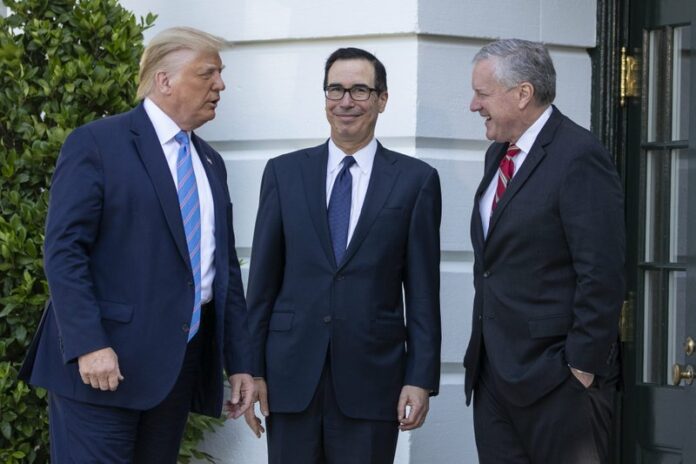 President Donald Trump on Wednesday dismissed Democratic demands to include aid for cash-strapped cities in a new coronavirus relief package and he lashed out at Republicans, saying they should “go back to school” if they reject money for a new FBI headquarters in the nation’s capital.

Trump, speaking alongside Treasury Secretary Steven Mnuchin at the White House, signaled his interest in preventing an eviction crisis as a federal freeze expires Friday on millions of apartment units. But he and his top emissary to Congress portrayed an otherwise dismal outlook as negotiations drag on before looming deadlines.

Trump complained about the “big bailout money” for cities. “It’s a shame to reward badly run radical left Democrats with all of this money they’re looking for,” he said.

The president was critical of his GOP allies over the $1.7 billion for FBI headquarters in the bill, a request opposed by Senate Majority Leader Mitch McConnell, R-Ky., as unrelated to virus relief.

Trump said the FBI’s central building should remain in Washington, near the Justice Department. It also is across the street from his Trump International Hotel, which could face competition if the FBI moves to Maryland or Virginia, as has been under consideration, and a hotel is developed on the FBI site.

“It’s the best piece of property in Washington,” Trump added.

“Republicans should go back to school and learn,” he said. ”You need a new building.”

A day earlier, Trump dismissed the GOP’s package as “semi-irrelevant,” though he said he wanted to stop the evictions.

As White House negotiators returned for a third day of talks, stark differences remain between the $3 trillion proposal from Democrats and $1 trillion counter from Republicans over aid for millions of Americans, small businesses and communities.

On Friday, a $600 weekly unemployment benefit expires, as does the federal eviction freeze on millions of rental units. At the same time, states and cites are waiting on billions in federal aid to help reopen schools and shore up budgets to prevent municipal layoffs.

House Speaker Nancy Pelosi, D-Calif., used a zoo metaphor to explain to Mnuchin and White House chief of staff Mark Meadows the differences between the two bills during private talks at the Capitol.

Say you are at the zoo, Pelosi told the White House team late Tuesday. You see a giraffe. You see a flamingo. These two bills, she said, they “aren’t mateable.” Senate Democratic leader Chuck Schumer of New York called the Democratic approach a lion — a “beautiful lion.”

The conversations were relayed by two people who were not authorized to publicly discuss the private session and spoke on condition of anonymity.

Money to help states, cities and counties is emerging as crucial dividing line.

Democrats proposed nearly $1 trillion for the local governments confronting COVID-19 emergency costs and declining revenues during the stay-home shutdowns. Republicans offered no new money, preferring instead to give states flexibility to use an earlier $150 billion allotment as needed.

Trump and Republicans are resisting giving cash to states and cities, complaining about their management. At one point this year, McConnell said states could just declare bankruptcy. His home state, Kentucky, is among many facing deep wells of red ink.

It’s clear that Democrats hold sway because Republicans are so deeply divided over the prospect of big government spending that McConnell is left with a severely weakened hand.

Despite Trump’s criticisms, McConnell defended his approach as “serious.” But any bill is only expected to have support from about half the GOP majority in the Senate.

“The coronavirus does not care that we are divided,” McConnell said in Senate remarks. “The American people are hurting and Congress should have their backs.”

With the virus death toll climbing and 4.2 million infections nationwide, both parties are eager for relief.

McConnell insisted he would accept no package without a liability shield against COVID-19 lawsuits, his priority from the start.

Pelosi called it “liability on steroids” — a sweeping ban on injury lawsuits — and she said McConnell ”sounded like a person who had no interest in having an agreement.”

But many other differences remain over funds for virus testing, hospitals and small businesses prompting some Republicans to consider trying to pass a more narrow bill, an approach dismissed by Democrats as too meager.

By Friday, the $600 weekly unemployment benefit bump is expiring for millions of jobless Americans. Republicans want to reduce it to $200 a week as an incentive to push people back to work.

On the eviction freeze put in place in March, Democrats proposed extending it, but Republicans did not include it in their bill. Trump hasn’t specified what he’s willing to do on that.

The two bills are widely seen as starting points in talks. One area of common ground is agreement on a new round of $1,200 direct payments to Americans earning $75,000 or less.

But Democrats also add a bonus for front-line workers, money for food stamps and other assistance.