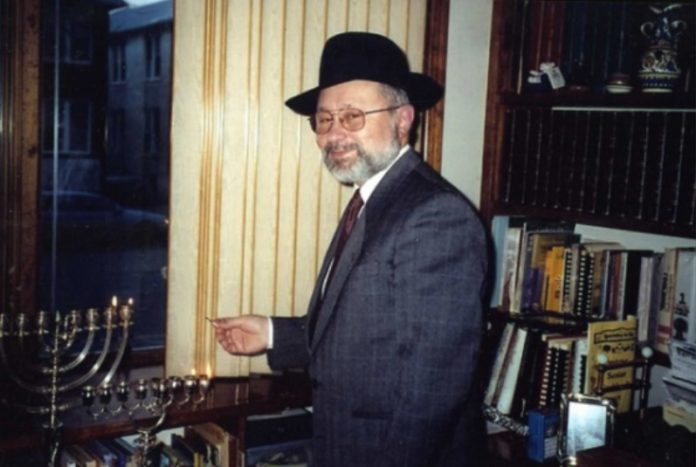 When the terror attack occurred, Avremel was fifty-five; his friend Ed, a quadriplegic, was forty-two. Both worked at Empire Blue Cross/Blue Shield as program analysts on the 27th floor of One World Trade Center.

By Chavie Zelmanowitz (sister-in-law), as told to Bayla Sheva Brenner

On the morning of 9/11, Avremel davened in the same shul with my husband, Yankel, which was unusual. Usually, whenever they said goodbye, they would shake hands. That morning, however, Avremel came toward Yankel and hugged him tightly before he left for work.

While driving home after taking me to work, Yankel heard that something had happened at the World Trade Center. He tried to call Avremel. I also tried. We couldn’t get through. Then Avremel called Yankel. He said, “I’m here with Ed. We’re waiting for help and then we’re going to leave.” Yankel called me and said, “I heard from Avremel—he’s going to leave.” I breathed a sigh of relief. Then I got a phone call from Avremel. I asked, “Where are you calling from? I thought you were on your way home.” He reassured me that the air was clear where they were, on the 27th floor. “I’m waiting here with Ed for someone to come help.” He said that Ed wanted to wait for a medical team, because in the past when people lifted him improperly, his bones would break.

Edward Beyea, who became disabled after a diving accident at age twenty-one, was a large man. He used a wheelchair with all kinds of contraptions. He had no arm or leg function, and operated his computer with a mouth stick. An aide accompanied him at all times. The normal routine was that the aide would bring him to work, set him up in his cubicle, and go up to the 43rd floor to the cafeteria. That’s where she was when the plane hit. There was water coming down, things were falling, smoke was filling the room. She immediately ran back down the staircase to the 27th floor and found the two of them together. Avremel assured her that he would stay with Ed and that she should leave. She barely made it out. Avremel is responsible for her survival.

Avremel told me, “The fireman is here and he wants me to move to another area.” That was the last we heard from him. No one had any idea that the buildings were going to go down. He didn’t stay to die; he stayed to help. That was his intention.

Avremel and Ed had worked together for twelve years. They traded books and tapes and played chess together. Avremel was a master carpenter; he built Ed a cigar stand and a book stand so that he would be able to read in bed. He used to visit Ed during his numerous hospitalizations. It was a friendship that culminated with this extraordinary act.

Initially our son-in-law made up a flyer; everyone was posting flyers for missing relatives. The flyer mentioned that Avremel was together with a quadriplegic friend. Immediately, we were bombarded by reporters. They wanted to hear details of the story. We were interviewed on a few news programs, at one point three in one day. A week after 9/11, our rav told us it was time to sit shivah. Rescuers were not finding anyone alive any longer. We knew Avremel had been in the building at the time. It was time to make a decision.

Avremel lived with us. When my parents went to Eretz Yisrael in 1973, just before the Yom Kippur War, he moved in. I was his big brother; I’m twelve and a half years older. We were very close. I took him into the textile business with me, and then he learned programming. He was really a wonderful human being. He had a lot of friends. Always friendly, always doing ma’asim tovim, favors for people, giving tzedakah, going to shiurim; everybody liked him. He was a simple guy who never looked for praise. His death made such a roshem, such an impression on people. Letters came in from people all over the world. A woman in Canada contacted us. She has a son with cerebral palsy who was fifteen-years-old at the time. She worried about him going into the workforce. “I hope I meet someone like Abe,” her son said.

That week, when President Bush spoke, he mentioned Avremel. He said: “We are here in the middle hour of our grief. So many have suffered so great a loss, and today we express our nation’s sorrow. . . . We have seen our national character in eloquent acts of sacrifice. Inside the World Trade Center, one man who could have saved himself stayed until the end at the side of his quadriplegic friend.”

My son, Chaim Shaul, was there when the president came the week of 9/11 to visit Ground Zero. He was told to stay behind to tell the story to the president. He called us and asked what he should do since it was erev Shabbos and time was short. We said, “Stay as long as you can, leaving yourself enough time to get home for Shabbos.” In the end, he had to leave before speaking with the president. We received a phone call from the president’s staff. “We’re looking for your son to meet the president,” they said.

On the first anniversary of 9/11, all of the victims’ families were at Ground Zero. The president spent time mingling with the families and made special time for us. He is a person with a heart; he is very compassionate. He didn’t know what to do for us.

Avremel’s actions that day are what defined him. He lived his entire life that way, always caring about people, always anticipating people’s needs. You wouldn’t have to ask Avremel for something; he’d understand that it had to be done and he’d go and do it. This was who he was. He was an extremely devoted son; his kibbud av va’eim was extraordinary. He never married or had children, but our children and grandchildren are following in his footsteps in their gemilut chasadim. How proud he would be to know that.

We were called upon to speak about Avremel very often—at shuls, dinners, et cetera. A library at a nearby yeshivah was dedicated to him. We were constantly on call; that helped us get through the initial period.

In August 2002, the police came to our home to inform us that they had identified Avremel’s remains. We were able to have a kevurah. He had always wanted to be buried in Israel; we asked someone to arrange for a plot on Har Zeisim. When we got there, we were amazed that he had found a plot available right at the foot of our parents’ graves.

In 2006, a street was dedicated to Avremel. The street, on the corner of East 35th Street and Kings Highway [in Brooklyn], our corner, was renamed Abe (Avremel) Zelmanowitz Way. One of the speakers at the dedication, Rabbi Shlomo Zucker, said it is so fitting that the street is called “way” rather than “lane,” “drive,” or “street,” because Avremel showed us the way to live, the way a person should conduct his life, and how he should interact with Hashem and his fellow man. That is his legacy. He led by example.

We have letters from people he worked with. One of his colleagues wrote, “We knew he was a religious man, but he never preached. He was always aware, thinking ahead, thinking of others.”

The effect that Avremel continues to have is amazing. After I heard the news about Bin Laden, I wanted to go down to Ground Zero. It was a relief; we felt a need to share it with those who had lost family members, to be close to them. While we were on the train to Manhattan, my son called us. He said he just got a call from NBC News. They wanted to interview us, find out about our feelings. Avremel’s story is out there.

While at Ground Zero, we must have given twelve or fifteen interviews. Reporters from all over sought us out, wanting to hear the story. We told them the story of Avremel. We always try to point out that it was an Orthodox Jew and a non-Jewish friend and this is what Avremel did because of his friendship.

The Shabbos before 9/11, Avremel had gone to a shiur. He was a very reserved person. He wasn’t pushy in any way. When the rav started to speak about Kiddush Hashem, Avremel interrupted him and said, “How could an ordinary person make a Kiddush Hashem?” He got an answer but wasn’t satisfied. Avremel interrupted him another time; again, the rav gave him an answer. Then he asked a third time. It wasn’t like Avremel to do that. Three days later, he got his answer.

Every rav has told us the same thing: it’s an obligation to perpetuate Avremel’s story. No matter how painful it is for us, we do it l’shem Shamayim. I feel it is our responsibility to perpetuate his Kiddush Hashem.