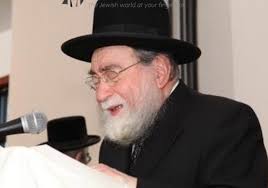 Chazal tell us in Meseches Avodah Zarah (5b) that we do not fully understand your Rebbe until you are forty years old.  Perhaps we can say that with greater understanding comes greater appreciation as well as understanding.  And perhaps it is not just for one’s Rebbe, but for one’s entire Mesorah too.

And so, when a wonderful new sefer suddenly comes to light from a brilliant Talmid of Rav Yaakov Kamenetsky zt”l, of Rav Avrohom Pam zt”l, of Rav Moshe Shisgal zt”l on inyanei Mussar and Yiras Shamayim – on Elul and the Yomim Noraim – one runs to enjoy its fascinating chiddushim, its depth, its profundity.  The experience is comparable to finding a long-lost uncle who tells you things about your own father growing up, who bears pearls and jewels from your grandfather’s home, and insights and thoughts along the lines that your father would have said.

The sefer is called Imrei Yosef and each page is filled with precious pearls of Torah and Yiras Shamayim.  Who was this remarkable Gadol?

He said shmuessim, remarkable ones – from that point until he was niftar.  He was also a Rosh Yeshiva in Beis Dovid in Monsey.  Forty two years ago, the Agudah of Monsey was looking for a Rav to guide them and lead them.  They consulted with Rav Yaakov zt”l.  He told them to take Rav Yosef Kantor and said, “Er is a klainer Chofetz Chayim.”

Learn the sefer, and you will see that it is true.

Boruch Hashem, the children took it upon themselves to print his shmuessim.  Otherwise this incredible cache of Mussar, Torah, and Yiras Shamayim, might have been forever lost.  And its insights abound.

Here are just a few:

HaOmer davar b’shaim omro – maivi geulah laOlam.  Part of the insights Rav Kantor reveals is that when there is no self-aggrandization – then Hashem’s role in everything can be truly revealed and not obscured by the person inserting himself or herself in the role of “saving the day.”  When the hand and input of Hashem is more fully revealed to the world – that in itself brings Ge’ulah.  Wow.  This is an incredible depth of understanding on the matter.

Why the blowing of the Shofar during Elul?  Rav Kantor goes through the sources, step by step, in the rishonim about its original use during Moshe Rabbeinu’s time – about how we failed during the chait haAigel.  Our failure was on account of the heightened state of spirituality we were in – along the lines of “kol hagadol m’chaveiro yitzro gadol – the greater the person is – the greater is his particular yetzer harah.”  The original shofar blowing in the camp – and ours as well – reveals to us that its purpose is to alert us to the state of war that we are in – while simultaneously maintaining our state of simcha – so that we simultaneously not stumble in depression and at the same time – be fully aware of the enormous battle we are in.  Wow!  Such pearls of depth!

The Minhag in Elul is to strengthen ourselves specifically in Torah study, however.  Is this not perhaps counter-intuitive?  Shouldn’t we focus more on matters of Mussar and Yiras shamayim?  Rav Kantor invokes Rav Yisroel Salanter’s explanation of the two aspects of the protective power of Torah – the general one of Torah and the specific one that learning the halachos of damages to others helps us avoid damaging others in the first place.  He reveals that the Anshei Knesses HaGedolah were the ones that led us in this approach in the first place when they wrote: vehu yiftach libeinu betoraso – veyasem belibeinu ahavaso veyriaso – opening our hearts in Torah releases a process, an automatic process, of granting us Ahavas hashem and yiras Hashem.

But like a levaya of a great man, these small vignettes barely scratch the surface of the true depth, beauty and inspirational character of Rav Kantor’s Torah.  He weaves all of his insights into what Elul and the Yomim Noraim are about, combines it with insights and Ramazim of Gedolim past, of our own Rebbeim, and Grand-Rebbeim.  Together, we have a tapestry that is just indescribable.

Rav Kantor’s sefer reveals to us a pathway, it illuminates it as well, as to how to make it through Elul and the Yomim Noraim.  One thing, however, is abundantly clear.  The first step we can take in this pathway – is to go out and acquire this sefer.  In all likelihood, this sefer will be seen alongside dozens of machzorim throughout the Yamim Noraim.

Rav Kantor zt”l  also said an Amud Yomi shiur for 21 years from Brochos through most of Baba Metziah (started 31 years ago). The shiur was recorded and was in the Torah Tapes library and Rabbi Applebaum (from Torah tapes) said that 1,000 plus people were listening to the shiur.

A website started in December has all the shiurim. They can be downloaded at rabbikantorshiurim.com