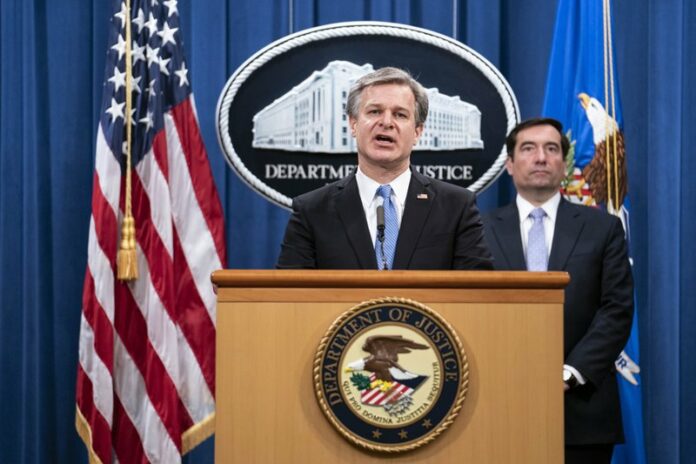 The Justice Department has charged eight people with working on behalf of the Chinese government in a pressure campaign aimed at coercing a New Jersey man who was wanted by Beijing to return to China to face charges, officials said Wednesday.

The defendants participated in a Chinese government operation known as “Fox Hunt,” which was ostensibly created to help Beijing locate fugitives abroad. But U.S. officials say in practice it relied on intimidation and bullying to go after dissidents and political opponents.

Five of the eight, including an American private investigator who was hired as part of the effort, were arrested Wednesday. The other three are believed to be in China. All eight were charged with conspiring to act as illegal agents for China in a case filed in federal court in Brooklyn.

“Without coordination with our government, China’s repatriation squads enter the United States, surveil and locate the alleged fugitives and deploy intimidation and other tactics to force them back into China, where they would face certain imprisonment or worse following illegitimate trials,” Assistant Attorney General John Demers, the Justice Department’s top national security official, said at a news conference announcing the charges.

The arrests are among a series of recent actions the Trump administration has taken against China, a country that President Donald Trump has said he regards as a prime adversary and that he blames for the coronavirus outbreak.

In July, for instance, the Justice Department charged hackers working with the Chinese government with targeting firms developing vaccines for the coronavirus. The administration also ratcheted up tensions over the summer by ordering China to close its consulate in Houston.

“Today’s charges reflect yet another example of China’s ongoing and widespread lawless behavior — and our refusal to tolerate it,” said FBI Director Christopher Wray. “Simply put: It’s outrageous that China thinks it can come to our shores, conduct illegal operations, and bend people here in the United States to their will.”

In this case, prosecutors said, the defendants in 2016 and 2017 harassed the family of man who had been a city government official in China before arriving in the U.S. 10 years ago.

The man and his family were not identified by name by prosecutors, but a 43-page criminal complaint says the Chinese government had accused them of violating bribery and abuse-of-power laws in that country.

Between 2016 and continuing through last year, a group of Chinese citizens working with a private investigator and at the behest of the Chinese government sought to bully the man into returning to the U.S. through an intimidation campaign that included surveillance and online harassment of the man’s adult daughter, unsolicited packages sent to his home as well as a threatening note left taped to his front door.

The note, written in simplified Chinese characters, said: “If you are willing to go back to the mainland and spend 10 years in prison, your wife and children will be all right. That’s the end of this matter!”

At one point, according to prosecutors, several of the conspirators coerced the man’s father into coming from China to the United States to persuade his son into returning to China to protect his family from physical farm.

There was no immediate response to an email seeking comment from the Chinese embassy in Washington.

In another case similar to the one announced Wednesday, the Chinese government sent a message to relatives in the U.S. of a target it could not locate, Wray said. The message explained that the person could either return to China promptly or commit suicide.

“These are not the actions we would expect from a responsible nation-state. Instead, it’s more like something we’d expect from an organized criminal syndicate,” Wray said.

Three of the five defendants were arrested in New York or New Jersey, and the other two were arrested in California, said Seth DuCharme, the acting U.S. Attorney for the Eastern District of New York.