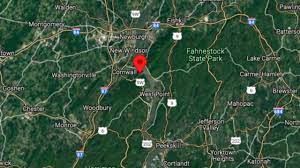 One person was killed after a helicopter crashed near Storm King Mountain on Sunday afternoon, New York State Police said.

According to the Federal Aviation Administration, the pilot was the only person on board the helicopter.

Local authorities, the National Transportation Safety Board and the FAA are investigating the crash.

Cornwall is located on the Hudson River about 55 miles (88.51 kilometers) north of New York.