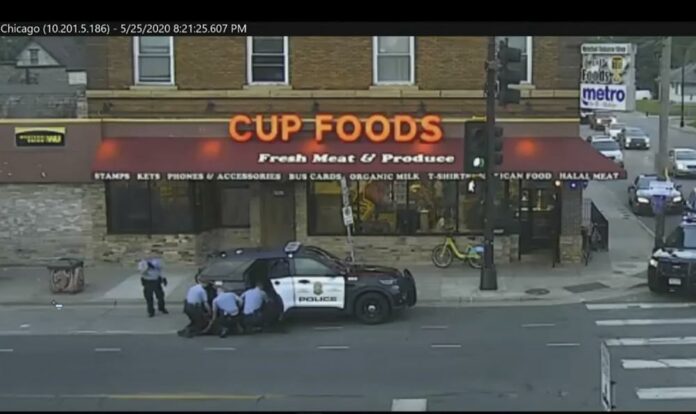 Much of the footage shown at the trial of former officers J. Alexander Kueng, Thomas Lane and Tou Thao was from police body cameras and street surveillance video that also was played extensively in the state criminal trial that eventually convicted Chauvin of murder last year. It shows Floyd struggling with officers as they try to put him in a police vehicle, him being held on the ground and later put into an ambulance, and a growing group of onlookers who become increasingly frantic as Floyd stops moving.

Police had responded to a 911 call that Floyd tried to use a counterfeit $20 bill to buy a pack of cigarettes at a corner store on May 25, 2020. His killing triggered worldwide protests and a reexamination of racism and policing.

Floyd died after Chauvin knelt on his neck for 9 1/2 minutes as the 46-year-old Black man was facedown, handcuffed and gasping for air. Kueng knelt on Floyd’s back, Lane held his legs and Thao kept bystanders back.

Kueng, Lane and Thao are broadly charged with depriving Floyd of his civil rights while acting under government authority. Chauvin pleaded guilty in November to a federal civil rights charges.

One video that prosecutors played for jurors Tuesday was from Thao’s body camera, which showed him pushing an onlooker. The video was shown during the testimony of the cashier who had taken the counterfeit bill. Christopher Martin, 20 — who also testified at Chauvin’s trial — said he had recorded about 30 seconds of video as bystanders were yelling at Thao to check Floyd’s pulse, but stopped when Thao pushed the other man.

He said he didn’t have a good view of Kueng or Lane.

Earlier, as prosecutors played other video of Floyd’s arrest, at least one juror appeared to be dabbing her eyes. Courteney Ross, Floyd’s girlfriend, was in the courtroom and also dabbed her eyes at times.

During opening statements Monday, prosecutor Samantha Trepel, who works for the Justice Department’s civil rights division, said that the videos will show the three officers stood by as Chauvin “slowly killed George Floyd right in front of them” and told jurors that prosecutors “will ask you to hold these men accountable.”

But it was Chauvin, the senior officer at the scene, who called “all of the shots,” Tom Plunkett, Kueng’s attorney, said, adding that the Minneapolis Police Department did too little to train officers to intervene when a colleague should be stopped.

Thao’s attorney, Robert Paule, focused on Floyd’s struggle with police before they restrained him. And an attorney for Lane, Earl Gray, said his client raised concerns about the restraint of Floyd, but was rebuffed.

Kueng, who is Black; Lane, who is white; and Thao, who is Hmong American, are all charged for failing to provide Floyd with medical care. Thao and Kueng face an additional count for failing to stop Chauvin, who is white. Both counts allege the officers’ actions resulted in Floyd’s death.

Gray told jurors that Lane will testify, but it’s not known if Thao or Kueng will. It’s also not clear whether Chauvin will testify, though many experts who spoke to The Associated Press believe he won’t.

Lane, Kueng and Thao also face a separate state trial in June on charges they aided and abetted both murder and manslaughter.