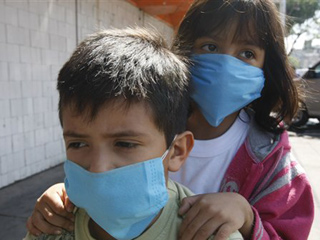 Bloomberg says the hospitalizations are separate from the outbreak at a private school in Queens.

The mayor says the hospitalized are a child in the Bronx and an adult in Brooklyn.

“Many hundreds of students were ill with systems that were most likely swine flu,” said Health Commissioner Thomas Frieden. “We are not trying to test all students.”

New cases are being probed at PS 177, a school for autistic children in Queens, and at Ascension, a parochial school in Manhattan, Freiden said.  PS 177 has been closed and authorities are deciding whether to close the Manhattan school.

The U.S. has more than 60 reported cases of swine flu, mostly in New York City. The sickness has killed dozens in Mexico.

The U.S. Centers for Disease Control and Prevention reported “a number of hospitalizations” among the confirmed cases, which include 17 new cases in New York City, four more in Texas and three more in California.

That brings the CDC count to 45 in New York City, 10 in California, six in Texas, two in Kansas and one in Ohio.

However, state health officials in California have confirmed three other cases, and Indiana authorities have confirmed one. There could also be another case in Orlando, Florida.