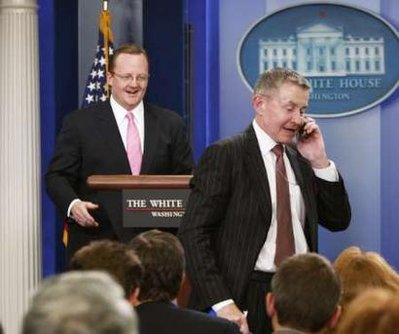 While struggling to explain the administration’s rationale for changing its mind on the release of photos depicting the abuse of detainees, he received a gift from above: a cell phone went off.

“Put it on vibrate man, we did this before,” he said to laughter.

The reporter apologized. And Gibbs let it slide.

Only seconds later, the salsa-toned phone started ringing again. Gibbs rolled his eyes and said, “Give me the phone.”

To much laughter, Gibbs strode from the podium and put out his hand demanding the phone. The reporter complied and Gibbs walked back to his office door and threw the phone out. (Someone allegedly caught it).

“I made the determination that the illumination of the sound was distracting the briefing as the Press Secretary to the President of the United States,” he laughed.

With that, Gibbs got a breather, the mood was lightened and normalcy could ensue. Right?

Wrong. Then veteran White House reporter Bill Plante’s phone began ringing (no salsa, however). Plante sits in the front row. Not embarrassed by the ringing, he casually took the call.

When Gibbs tried to take his phone, the CBS reporter explained to the caller that “Gibbs wants to take my call but I don’t think that’s a good idea.”

Plante then stood up and told Gibbs or the caller that “he would explain later.” The normally reserved briefing room morphed into the sounds of a hockey game as Plante slowly walked out of the room to take the call.

“Whoa!” yelled a few reporters. Others just laughed. No one threw anything though. And riot police were not called in.

Gibbs said it best when back up at the podium: “Cotton candy down the street. It’s a circus.”