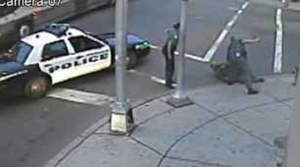 [VIDEO LINK BELOW] A man believed to be mentally ill was beaten repeatedly with a baton by a New Jersey cop – and the entire incident was caught on tape, according to The Bergen Record.

Passaic police are now investigating Joseph Rios III for use of excessive force. The surveillance video, captured by a camera outside Lawrence’s Restaurant, clearly depicts 49-year-old Ronnie Holloway standing at a crosswalk as a squad car pulls up. Then Rios slams Holloway to the pavement and proceeds to punch him and hit him with his baton as he lies prone on the street corner. Rios continues to beat the man, throwing him against the patrol car and down to the street, until other offices arrive at the scene.

Holloway, whose mother says he suffers from schizophrenia, claims he did nothing to incite the attack; the surveillance video does not appear to show him resisting the officer’s blows. Holloway claims he was complying with the officer’s request to zip up his sweatshirt – he had been bare-chested – when the attack ensued, according to The Record.

“That’s when he grabbed me and slung me on the car,” he told the paper. “He had his hands on my collar.”

Holloway was arrested in the May 29 incident and charged with resisting arrest, disorderly conduct and wandering with the intent to purchase drugs. He filed an Internal Affairs complaint and demanded a complete investigation by county prosecutors, according to the paper.

Cops had nothing to say about the incident other than that it was under investigation. Rios, a 7-year veteran of the force, remains on active duty.

Protestors held a rally in the city Saturday against police brutality. More than 100 people showed up, including Holloway, many of them bearing signs that read “Stop the madness,” “No justice no peace” and “Fire Rios.”