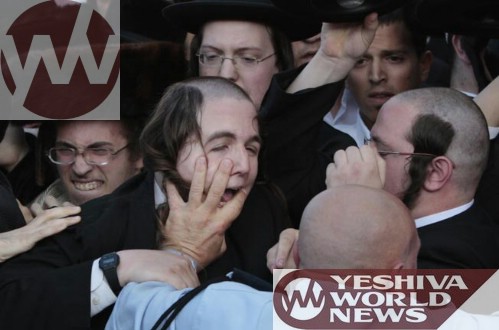 [YWN VIDEO & PHOTO LINK BELOW] Jerusalem Councilman R’ Yosef Deutch has harsh words for Israel Police, explaining that instead of permitting the thousands to silently protest as was the event this past Shabbos at Kikar Safra/City Hall, police used batons without discrimination, unjustifiably striking protestors and injuring many, while inflaming the situation which escalated to becoming unruly and violent at times.

Deutsch hopes to meet with Minister of Public Security Yitzchak Aharonovitch and Israel Police Chief Dudi Cohen, seeking an explanation as to the unacceptable actions and behavior of police.

It should be pointed out that among the police troops assigned to the event were members of the Yassam, who brutality has been seen frequently in the past against right-wing protests and in Amona and other areas. They were wearing riot gear and waving batons, a move some feel sent a clear message of police intentions against unarmed demonstrators.

Rav Deutsch pointed out that the large protest was peaceful, led by Gedolei Yisrael, and their simply was no justification for the actions of police.

Leaders of the Eida insist they will not tolerate the insult to Shabbos Kodesh in Yerushalayim, and they are prepared for whatever mesirus nefesh is demanded to stand and defend the honor of the Shabbos.

One of the meetings held last week in an effort to reach an agreement was between Deputy Education Minister (Yahadut HaTorah) R’ Meir Porush and Police Major-General Bruno Stein, who commands the Tzion station, during which Porush explained the magnitude of the insult to Shabbos as it is perceived by the chareidi community, stating the opening of the municipal parking lots represents an unacceptable affront to Kedushas Shabbos in Yerushalayim.

Adding fuel to the flames of dispute was the Jerusalem police commander, who on motzei Shabbos stressed the department is determined to do what it takes to keep the parking lots operational on Shabbos, and it is not deterred by the protests in any way whatsoever.

Rabbonim appear determined and they insist they will not halt protests until such time the parking lots are closed on Shabbos as has been the case in the past.

YWN VIDEO & PHOTO LINKS: Click HERE for photos of the Hafganos, and HERE & HERE for video.