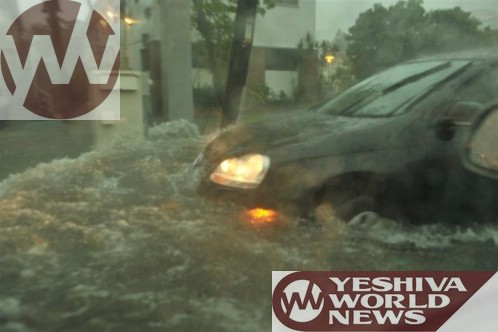 [PHOTO LINK BELOW] Residnets of Miami can expect another round of strong storms to drench South Florida Sunday afternoon.

Heavy to severe thunderstorms with frequent cloud to ground lightning are possible along with high wind and torrential rainfall.

After Friday’s severe thunderstorms wreaked havoc across all of South Florida, many may be hoping for a break in the forecast. But that doesn’t appear likely.

Friday, storms dumped upwards of 8 – 12 inches of rain across parts of South Beach and 4 – 8 inches dropped in downtown Miami in just a couple hours.

Flooding in parts of Miami Beach was so bad that traffic was shut down or at a standstill on the main roads that lead into the island. The MacArthur Causeway was closed, and police told drivers on Friday night to avoid the Venetian and Julia Tuttle Causeways, as well as the 79th Street Causeway because of heavy traffic trying to get into the flooded beach streets.

Parking garages, including the one by the Regal Cinema on Lincoln Road were flooded at the ground level, with cars submerged in water up to more than a foot deep.

The manager of the Bayview Terrace Condominiums, Ivan Herlinsky told CBS4 Reporter Natalia Zea that as the water poured in, he tried to pump it out, but he couldn’t keep up with it. His own Volvo along with nearly 50 other cars were destroyed. He said, “It’s a total loss I’m sure. None of these cars are salvageable I don’t think. It’s an act of God, nothing you can really do.”

Some Miami Beach residents are also dealing with power outages. Many folks who live at the Mirador Condominiums building are spending the night elsewhere, as crews try to restore power and water to that building. Resident Enrique Barrero is worried what these major storms may mean for hurricane season. “It’s like a bad omen,” he said.

The newly revamped Fontainebleau Hotel sustained significant damage as a result of the floods, and management has closed off those areas to the public for their safety. By Saturday morning, the hotel was fully operational with its restaurants, and stores open for business.

The flooding was caused by storms that trained across the same area throughout the late afternoon. Training, in meteorological terms, is when storms form and then new storms form and drop heavy amounts of rain in the same spot, which causes heavy flooding.

In addition, power was knocked out to thousands of residents in South Florida. At one point more than 17 thousand customers in Miami-Dade and Broward Counties were without power because of the storms. As of 4 p.m. Saturday morning, about 6,000 customers were still without power in Miami-Dade County and 461 in Broward.

The storms also wreaked havoc on local airline departures with dozens of flights at both Miami International Airport and Fort Lauderdale International delayed due to the severe thunderstorms.