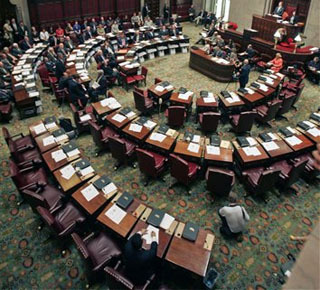 It’s the theater of the absurd in Albany, where chaos rules.

On Wednesday a Democratic sit-in was followed by Republicans duking it out in court.

It was just another day in the circus that is the state capitol.

It was a move some said was more appropriate for a college campus. Senate Democrats staged a sit-in in the Senate chamber. Starting at 6 a.m. and rotating every two hours, they took turns filling the leadership chairs. Senator Craig Johnson was the 6 a.m. guy.

“What we were trying to accomplish today Marcia was very simple, what we’ve been wanting to accomplish for the last several week — a short term bipartisan resolution to get bills accomplished,” said Johnson, D-Port Washington.

“I think it just adds to the mockery of what they’ve done here over the last two weeks,” said Sen. Andrew Lanza, R-Staten Island.

For their part, the Republicans sued Secretary of the Senate Angelo Aponte for turning off their microphones and other infractions. A judge continued the case until Friday.

“He’s operated well outside the realm of legality in terms of doing a whole host of things, shutting off the lights, turning out the cameras, cutting the intercom system,” said Sen. Frank Padavan, R-Queens.

The Republicans also called for binding arbitration to settle the question of who is in charge of the upper house. They are spilt 31-31 and they absolutely refuse Gov. David Paterson’s demand that they return to the chamber for a special session.

“I don’t want to continue to have this kind of contribution to the circus,” said Sen. Pedro Espada, D-Bronx.

Democrats did gavel in for a special session, but they brazenly declared they couldn’t pass any bills because the governor made a mistake by not calling the Assembly into special session, too.

“The bills that were passed by the Assembly in the regular session, that are now before us in extraordinary session would be invalid,” said Jeffrey Klein, D-Bronx.

And Democrats breaking ranks with Paterson for the second day in a row caused the governor to become one unhappy camper.

“I am directing the state treasurer to withhold any paychecks or any per diem checks from June 8 forward. If you’re not coming to work, you shouldn’t get paid,” Paterson said.

What Wednesday’s shenanigans prove is that the governor has no clout. One house refused to show up, while the other thumbed its nose at him.

Good government experts are stunned that the nonsense has carried on this long – with no end in sight.