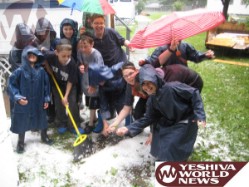 At 1:57PM National Weather Service Doppler radar indicated a severe thunderstorm. This storm was located near Fremont and moving east at 20 mph.

This storm has the potential to produce nickel to quarter sized hail.

At 2:50PM EST a dangerous storm was hitting the Kiamisha / Monticello area. Dangerous lightening, and hail the size of quarters were pelting the area. Many bungalow colonies were plunged into darkness following lightening strikes as well.

UPDATE 4:00PM EST: The entire Monticello area is currently without power. YWN has been informed by Sullivan County Officials that crews are working feverishly to restore power asap.

UPDATE 4:45PM EST: The National Weather Service has issued another sever thunderstorm warning for Southern-Sullivan County until 5:15PM EST. The storm is capable of producing large hail, strong winds, & dangerous lightening. Please use caution while driving on the roads.

Additionally, the Monticello area remains without power – resulting in many camps & bungalow colonies without water. (Many locations rely on pumps from wells which operate on electricity.