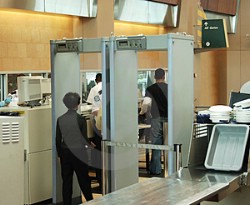 Plainclothes investigators sent to test security at federal buildings in four U.S. cities were successful in smuggling bomb components through guard posts at all 10 of the sites they visited, according to a government report.

The investigators then assembled the bombs in restrooms and freely entered numerous government offices while carrying the devices in briefcases, the report said.

The buildings contained offices of several federal lawmakers as well as agencies within the departments of State, Justice and Homeland Security, which is responsible for safeguarding federal office buildings.

CNN obtained the report late Tuesday, ahead of its expected release Wednesday at a hearing of the Senate Committee on Homeland Security and Governmental Affairs.

The Government Accountability Office, the investigative arm of Congress, conducted the tests to check on the effectiveness of the Federal Protective Service .The FPS protects federal buildings by having about 1,200 federal law enforcement officers oversee an army of 13,000 private security guards.

In a videotape obtained by CNN, a covert GAO inspector places a bag containing bomb components on an X-ray machine conveyor belt and then walks through a magnetometer at an unidentified federal building. Unlike some covert tests that use simulated explosives, the GAO used actual bomb components in the test and publicly available information “to identify a type of device that a terrorist could use” to damage a building.

“The (improvised explosive device) was made up of two parts — a liquid explosive and a low-yield detonator — and included a variety of materials not typically brought into a federal facility by an employee or the public,” the report says. Investigators obtained the components at local stores and over the Internet for less than $150, the report says.

After the components were smuggled into the building and assembled, the GAO says, it took steps to ensure the device would not explode. But to demonstrate the device’s destructive power, the GAO videotaped the detonation of several devices at a remote site.

The GAO also released a photograph of a guard asleep at his post and detailed an instance in which a woman placed an infant in a carrier on an X-ray machine while retrieving identification. Because the guard was not paying attention and the machine’s safety features had been disabled, the infant was sent through the X-ray machine, according to the report.

The FPS dismissed the guard, who, as a result, sued the agency for failing to provide X-ray training. FPS lost the suit because it could not prove that the guard had been trained, the report says.

All of the buildings involved in the test were “Level IV” buildings, meaning they housed more than 450 federal employees and have a high volume of public contact. The GAO has declined to identify the specific buildings “because of the sensitivity of some of the information in our report,” the report says.

The GAO said that FPS has taken several steps to improve oversight of the guard program in response to the GAO investigation.

Specifically, the FPS has authorized overtime to conduct guard post inspections during off-business hours and is conducting its own tests. It has also moved to standardize inspections of guard posts across the country.

In prepared testimony, FPS Director Gary Schenkel said, “It was apparent FPS was experiencing some serious challenges” when he arrived at the agency in early 2007. Schenkel says the FPS has been focused on “standardizing its practices.”

“When GAO presented its findings several weeks ago, we took it very seriously,” Schenkel’s testimony says. Within three hours of learning of the issued identified by the GAO, he increased the number of inspections of guard posts, he said. He has also established a team to “aggressively attack” the challenge of overseeing the contract guard program, he said.

“We knew that the FPS was a troubled agency, but that GAO could penetrate security at these buildings and make bombs without detection is truly shocking,” he said.

The GAO report concludes that FPS “does not fully ensure that its guards have the training and certifications required to stand post at federal facilities.”

The GAO says it visited six of the 11 FPS regions and that in all six regions, FPS did not require some of its guards to complete the mandatory 128 hours of training.

In one region, FPS “has not provided the required 8 hours of (X-ray) or magnetometer training to its 1,500 guards since 2004,” the report says.

The report also says FPS does not have a national guidance on how often FPS inspectors should check on the contract guards. In several instances when inspectors have checked on guards, they found “instances of guards not complying with post orders.”

In one case, the GAO report says, a guard was caught using government computers to manage a for-profit adult Web site.

David Wright, president of a union which represents about 1,000 federal employees, said the study shows the FPS is in a “pretty sad state.”

“I do not believe that adequate training is provided (for the contract guards),” he said. “I think it is very unequal — kind of a mish-mash across the country. In some cases we leave training up to the contractor, and (it) clearly is not sufficient.”

Wright says his immediate goal is to have federal officers — not contract guards — protect Level IV buildings, and ultimately to have them protect Level III buildings as well.