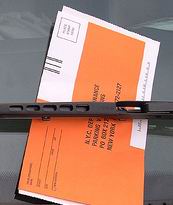 Merchants and elected officials are blasting what they call a parking ticket blitz in the borough that’s driving customers away from local businesses.

But the NYPD says ticketing has actually gone down since last year.

As one example, he pointed to the intersection of Westchester and Castle Hill Aves., which he said saw about 5,000 parking tickets issued over the past year.

“This intersection is the highest I’ve ever seen,” Vacca said.

Vacca was joined at a news conference there by Brooklyn Councilman- and candidate for public advocate – Bill de Blasio (D-Park Slope), who called for a citywide audit of ticketing practices to find possible patterns of abuse.

De Blasio charged that while other city agencies are under a hiring freeze, Mayor Bloomberg’s plans to hire 200 additional traffic agents shows aggressive ticketing is “part of a revenue strategy” to prop up the shrinking city budget.

Both politicians blasted zero-tolerance enforcement of tiny or momentary violations – ticketing drivers double-parked waiting for another car just pulling out of a parking space, or agents hovering over meters to write a ticket the moment time expires.

A bill Vacca introduced to combat questionable tickets would require traffic agents to include a photograph clearly showing the violation with each ticket issued.

“The ‘I Gotcha’ tickets have got to stop,” Vacca said.

While not addressing ticketing activity at the Castle Hill intersection, the NYPD said statistics showparking tickets issued by uniformed officers in the local 43rd Precinct are down by 1,200 so far for the first six months of the year.

Boroughwide figures for parking tickets issued by both uniformed officers and traffic agents show about 24,000 fewer tickets issued in the first six months of this year than in the same period last year.

“This information doesn’t correspond to what I’m hearing on the ground and what I see seven days a week,” said Vacca. “If there’s a decrease, it’s not in my district.”