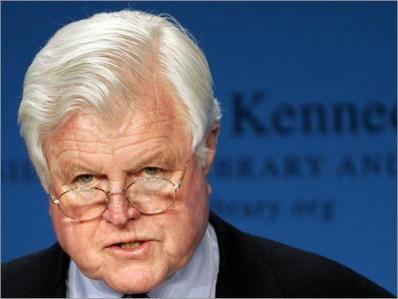 Sen. Edward M. Kennedy, the liberal lion of the Senate and haunted bearer of the Camelot torch after two of his brothers fell to assassins’ bullets, has died at his home in Hyannis Port after battling a brain tumor. He was 77.

For nearly a half-century in the Senate, Kennedy was a steadfast champion of the working class and the poor, a powerful voice on health care, civil rights, and war and peace. To the American public, though, he was best known as the last surviving son of America’s most glamorous political family, the eulogist of a clan shattered again and again by tragedy.

His family announced his death in a brief statement released early Wednesday.

“We’ve lost the irreplaceable center of our family and joyous light in our lives, but the inspiration of his faith, optimism, and perseverance will live on in our hearts forever,” the statement said. “We thank everyone who gave him care and support over this last year, and everyone who stood with him for so many years in his tireless march for progress toward justice, fairness and opportunity for all.”

A statement from the White House said President Obama and First Lady Michelle were “heartbroken” to learn that Kennedy had died.

“For five decades, virtually every major piece of legislation to advance the civil rights, health and economic well being of the American people bore his name and resulted from his efforts,” read the statement from President Obama. “I valued his wise counsel in the Senate, where, regardless of the swirl of events, he always had time for a new colleague.”

Kennedy was elected to the Senate in 1962, when his brother John was president, and served longer than all but two senators in history. Over the decades, he put his imprint on every major piece of social legislation to clear the Congress.

His own hopes of reaching the White House were damaged – perhaps doomed – in 1969 by the scandal that came to be known as Chappaquiddick, an auto accident that left a young woman dead.

Kennedy – known to family, friends and foes simply as Ted – ended his quest for the presidency in 1980 with a stirring valedictory that echoed across the decades: “For all those whose cares have been our concern, the work goes on, the cause endures, the hope still lives and the dream shall never die.”

Kennedy learned he had a malignant tumor called a glioma after suffering a seizure on May 17, 2008, at his home in Hyannis Port. The prognosis was grim: Median survival for the worst form of gliomas is 12 to 15 months, although the time depends on the type of glioma.

His death late Tuesday comes just weeks after that of his sister Eunice Kennedy Shriver on Aug. 11.

In recent weeks, Kennedy had spent most of his time at his Hyannis Port home with his family, appearing frail during his brief public appearances. He was too ill to attend the funeral of his sister. Nor could he make the Presidential Medal of Freedom ceremony when President Obama awarded him the country’s highest civilian honor.

The famed orator made only a handful of public statements since he was first stricken, including a surprise speech in August to the Democratic National Convention, a December address at his alma mater, Harvard University and brief remarks at the White House health care conference in March.

In a recent interview with The Associated Press, Kennedy’s son Rep. Patrick Kennedy, D-R.I., said his father had defied the predictions of doctors by surviving more than a year with his fight against brain cancer.

The younger Kennedy said that gave family members a surprise blessing, as they were able to spend more time with the senator and to tell him how much he had meant to their lives.

The younger Kennedy said his father’s legacy was built largely in the Senate.

“He has authored more pieces of major legislation than any other United States senator,” Patrick Kennedy said in the interview. “He is the penultimate senator. I don’t need to exaggerate when I talk about my father. That’s the amazing thing. He breaks all the records himself.”