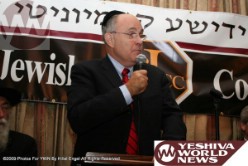 Raising the specter of a return to higher crime and greater anxiety, former Mayor Rudolph W. Giuliani warned today that New York could become a more dangerous city if Mayor Michael R. Bloomberg is not re-elected in November.

Mr. Giuliani did not mention Mr. Bloomberg’s Democratic challenger, William C. Thompson Jr., by name. But during the first of two campaign events alongside Mr. Bloomberg, he said that not long ago many parts of the city were gripped by “the fear of going out at night and walking the streets.”

Mr. Giuliani made his blunt – and to some minds, incendiary – comments a day before Mr. Bloomberg, a two-term incumbent, was scheduled to gain momentum in his quest to boast the strongest anticrime credentials in the mayor’s race: the endorsement of the city’s largest police officers’ union, the Patrolmen’s Benevolent Association, according to two people told of the plans.

The union has long had a fractious relationship with Mr. Bloomberg. It backed his opponent in 2001, Mark Green, and refused to endorse anyone in 2005. It has squabbled over pay and benefits during much of Mr. Bloomberg’s eight years in office. It has even protested outside Mr. Bloomberg’s town house.

But the mayor’s relationship with the association began to improve last year when the city granted pay increases in the union’s latest contract without demanding significant concessions.

Mr. Giuliani’s increasingly prominent role in the Bloomberg campaign – he also marched with the mayor in the day’s second event, the Howard Beach Columbus Day parade in Queens – is not risk-free.

Mr. Giuliani remains a polarizing figure in some neighborhoods, and he has become much more of a by-the-book Republican since leaving office; he has, for instance, said that President Obama has been much worse than he had expected. By contrast, Mr. Bloomberg, an independent who is running as a Republican, has repeatedly praised the president for his work on issues like health care.

“This is a tired Republican campaign tactic – scare people into voting by threatening their personal safety,” said Anne Fenton, a spokeswoman for the Thompson campaign.

“It didn’t work for Rudy Giuliani during his abysmal presidential bid, and it’s not going to work for Mike Bloomberg this year. Bill Thompson is committed to public safety, not manipulating people and inciting unnecessary public fear.”

City Councilman Bill de Blasio of Brooklyn, the Democrat who is likely to become the city’s next public advocate, said he was appalled.

“Giuliani’s comments verge on race-baiting,” he said. “Bloomberg should disavow those comments and show that he doesn’t buy into that kind of rhetoric.”

When asked later at an event in Red Hook, Brooklyn, whether he shared Mr. Giuliani’s views, Mr. Bloomberg did not answer directly. Instead, the mayor, who was flanked by Mayor Cory A. Booker of Newark and James P. Hoffa, president of the International Brotherhood of Teamsters, at an event to push for green jobs, said that cities go through boom and bust cycles.

He then pivoted to one of his favorite campaign subjects – education: “All of our gains are always in danger of being turned around.”