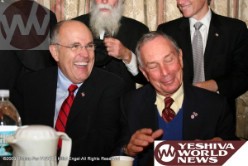 This special event coordinated by the acclaimed public relations firm, The Friedlander Group, honored NYC Mayor Mike Bloomberg who was introduced by a ringing Councilman Simcha Felder. Surprise Guest Former Mayor Rudy Giuliani wooed the crowed with his presence and strong words of support for Mayor Bloomberg. William Rapfogel, CEO of Metropolitan Council on Jewish Poverty served as Breakfast Chair. The general theme of the breakfast was articulated by Assemblyman Dov Hikind who paid tribute to the Holocaust Survivors for recreating the cultural landscape of Boro Park with a vibrant Jewish presence, blending the warmth and charitable practices of the past with the contemporary community. The gathering also focused on the uniqueness of Boro Park and its bright future of continued growth and ongoing transformation.

This event is always a valuable outlet for the survivors whose daily personal challenges as senior citizens are compounded by the horrific memories they have been forced to carry throughout the years. It is widely believed that this annual BPJCC event serves as an important stimulation for those participating, allowing them to reconnect with old friends and forge new relationships that add immeasurable companionship and pleasure to their lives.