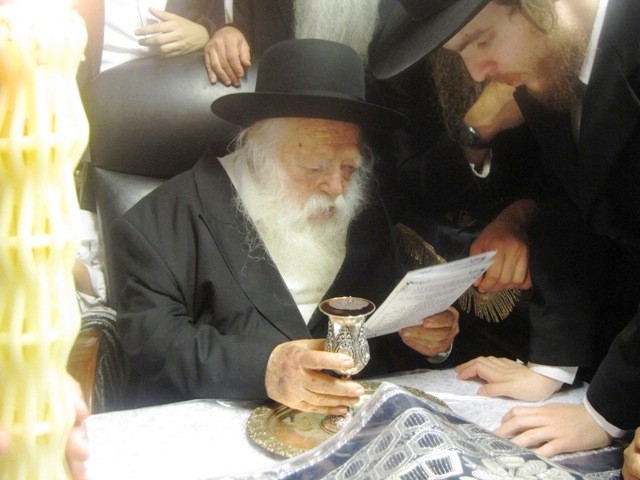 It is a well-known fact that HaGaon HaRav Chaim Kanievsky Shlita does not seek to derive pleasure from this world, distancing himself from items of comfort. It is also known that the Rav has on many an occasion distanced himself from gifts for the same reason.

Rav Kanievsky came to the realization that his kiddush becher was no longer suitable to perform the mitzvah. HaRav Aaron Binah, the rosh yeshiva of Netiv Aryeh heard of the decision, jumping at the opportunity to purchase a new becher for the Rav, and he did just that.

According to a Chareidim report, Rav Chaim used the new large sterling becher on motzei shabbos Bereishis to make havdalah. The report adds the Rav is stringent to use wine and not grape juice for havdalah, which is a special segulah for those who join him, seeking a bracha for a son. The Rav is also stringent to drink a ‘rov kos’, a majority of the cup, which according to the report is no simple task since the new becher is considerably larger than its predecessor. Doing so would without a doubt compel one to head directly to bed to rest due to the volume of wine involved.

It was realized that the new becher was simply too large to drink a ‘rov kos’ and on erev shabbos, R’ Binah returned with two other cups, the same style as the new one, but both smaller, permitting the Rav to make havdalah this week and to drink as is his custom and head for melave malka.

In the meantime, discussion is underway as to who will merit receiving the Rav’s old becher.