YWN regrets to inform you of the Petira of Hagon Rav Dovid Kviat ZATZAL, a long-time Magid Shiur in Mirrer Yeshiva (Brooklyn) & Morah D’asra of Agudas Yisroel of 18th Avenue in Boro Park.

Rav Dovid Kviat ZATZAL was one of the last “Alter Mirrer”, the title given to those who learned in the Mirrer Yeshiva in Poland, and who miraculously survived the hands of the Nazis YMS by fleeing with the entire Yeshiva to Shanghai, China.

Rav Kviat spent his entire life being Marbitz Torah to thousands of Talmidim. He was also a member of the Nesius of Agudas Yisroel of America.

The Levaya is scheduled to take place at 1:00PM in the Agudas Yisroel of 18th Avenue, located at 5413 18th Avenue in Boro Park, and at 3:00PM in the Mirrer Yeshiva, located at the corner of Avenue R and Ocean Parkway in Flatbush.

Kevura will be in Eretz Yisroel.

Rabbi Kviat is most famous for his works on the Talmud entitled “Sukas Dovid.” In the later years Rav Kviat has written commentaries on the Chumash and Yomim Tovim. They are also called “Sukas Dovid.” 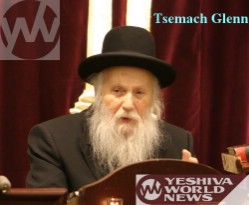 Rabbi Kviat’s father was Rabbi Avrohom Eliezer Kviat. Rav Avrohom Eliezer was a student of both the Slabodka Yeshiva as well as the Novardok yeshiva in Europe, although he was a Slonimer Chasid. Rav Dovid had two older brothers, Yaakov and Yisroel. Reb Dovid was born in Bialystok, Poland, which was at the time part of Belarus.

The Kviat family was extremely poor as were most residents of Bialystok at the time. When Reb Dovid was three years old his mother, Chaya Reisha a”h, died. Reb Dovid’s aunt helped take care of him after that.

The Torah education system in Bialystok was unique in that the Cheder and the Mesivta Yeshiva were both in the same city and under the same educational system. Most other cities only had a cheder.