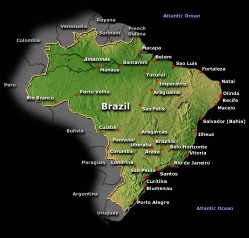 Sao Paulo – Several major Brazilian cities including the two largest, Sao Paulo and Rio de Janeiro, were plunged into darkness Tuesday, in a blackout initially attributed to problems at a hydroelectric dam.

The power outage hit at 10:15PM (0015 GMT Wednesday) and spread to the states of Sao Paulo and Rio de Janeiro, including both their capitals, the states of Minas Gerais and Espirito Santo, in the southeast, Mato Grosso do Sul, in the southwest, parts of the central state of Goias, as well as the federal district of Brasilia.

Frum residents residing in the neighborhood of Jardim America, Sao Paulo tell YWN via landline that their neighborhoods are without power.

The blackout reportedly affected large swaths of Brazil’s major cities in those states as well.

Globo television said National Electric System officials blamed the blackout on a domino effect in the country’s power grid from a power failure at the Itaipu hydroelectric plant that Brazil shares with Paraguay.