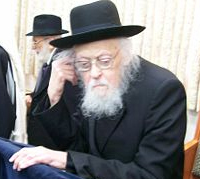 Gadol Hador Maran Rav Yosef Sholom Elyashiv has dispelled the widely spread custom of davening at the Kosel 40 consecutive days, an act that is believed to carry a special koach and assist those seeking a y’shua.

According to Rabbi Moshe Fried in his ‘Dvar Hashem Zu Halacha’ publication, based on personally asking the Rav questions during frequent visits, Rav Elyashiv is quoted as stating there is “no inyan” in such an act, adding one’s tefillos are accepted each time one davens at the Kosel.

There are a few major Tzedakas which advertise that they will “daven for 40 days consecutively at the Kosel” if you donate monies to their organizations. They also advertise doing this custom at other Mekomos Hakdoshim. Rav Elyashiv did not say anything about those – just the Kosel.