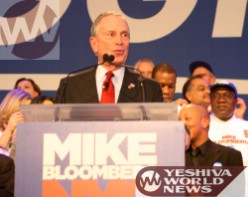 Mayor Michael Bloomberg has vetoed a bill that would have given drivers a five-minute grace period in certain parking zones in the city.

The bill, which was passed by the City Council last month by a vote of 47-2, would have given drivers an extra five minutes past the expired time on Muni-Meters and alternate-side parking.

The City Council may decide to override the mayor’s veto.

The mayor has called the legislation irresponsible and unnecessary.

THE FOLLOWING WAS RELEASED BY COUNCILMAN SIMCHA FELDER & SPEAKER QUINN:

Issuing New Yorkers a parking violation just two or three minutes past the time when alternate side parking goes into effect or a muni-meter stub runs out is simply unfair. These parking rules are not in place for the purpose of generating revenue. They are in place to promote compliance and that is why creating a 5 minute grace period for drivers to move their vehicles is a fair and appropriate action to take. At tomorrow’s Stated Council meeting we will accept the Mayor’s veto of this bill and expect that the vast majority of Council Members will vote to override this veto at the next Stated Council meeting on December 21st.

While I am one of the Mayor’s biggest fans I respectfully disagree with this veto. This legislation is about common sense and decency and its passage will help change the ticketing culture of New York City. There is no reason why 300,000 tickets a year are issued within the first five minutes of alternate side parking regulations going into effect. In fact, until recently it was actually the informal policy of the City to give drivers a five minute grace period. I am grateful for Speaker Quinn’s leadership on this issue and I am confident we have the votes in the City Council to override this veto.