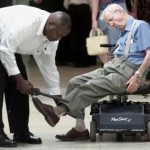 After hearing the outrageous news on Thursday, about a 17-year-old wearing Tefillin – who was deemed suspicious enough to prompt an emergency landing, and security alert, I have decided to send you the following story with the attached video link (which I personally recorded).

This past Wednesday, I was on a flight from San Fransisco heading to New York. Just before take-off, a man walked onto the plane carrying a metal box with wires coming out of it.

“Do you mind if I put this here?” he asked me, as he stowed a big knapsack in the overhead compartment. “That depends,” I answered. “Is it going to blow up?” He said, “It’s a charger,” and slid into the window seat.

The man appeared to be Muslim and the flight ended in Istanbul (after stopping in NY) –  and it appeared that was his destination.

He had what looked like a padded CD case around his neck with wires hanging out of it and a metal flask of some kind also strapped to him. He put the metal box into the seat pocket in front of him. I didn’t know what to do (so I just davened…HARD!).

The flight attendants seemed oblivious. I tried to tell a TSA guy when I got off the plane – just in case this was a dry run for something unthinkable, but he ignored me.

And the funny thing was, when I went through security in San Fransisco, I noticed the TSA folks patting down a little old lady…

That’s right. Little old ladies and 17-year olds wearing Tefillin are a threat to our national security, but Muslim men with gear strapped onto them, holding a metal box with wires…they’re just fine…G-d bless America.