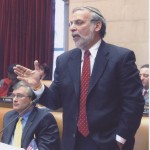 Boro Politics reports: The upcoming special election to succeed Simcha Felder for the 44th District City Council seat is shaping up as a political version of David versus Goliath, according to Hassidic and Orthodox Jewish political pundits in Borough Park.

But in this case, the David is candidate David Greenfield and the Goliath is longtime Assemblymember Dov Hikind.

“Hikind wants to crush Greenfield and everyone knows it,” said one highly knowledgeable political source.

Ironically, Greenfield got his political start working as Hikind’s chief of staff.

“Dov has earned the respect from everyone in the community for going beyond what an ordinary assemblyman can accomplish,” said Ezra Friedlander, CEO of the Friedlander Group, a leading government and public relations firm based in Borough Park. “But that said, this election will be closely watched for its implications not only pertaining to the actual candidates but to Dov Hikind, who is universally regarded for time immemorial as the tone setter of how the community should exercise its vote,”

At press time, the special election race looks to be a two-man contest between Greenfield and longtime civil servant Joe Lazar. Former State Sen. Seymour Lachman is also considering throwing his hat in the ring.

Lazar recently received Hikind’s blessing after the assembly member struck a deal with Borough Park’s Hasidic community, according to sources.

Hikind originally wanted former City Councilmember and current Civil Court Judge Noach Dear to run against Greenfield, but met with resistance from the Hasidic community, who were considering putting up their own candidate.

Hikind, who has been in office 28 years, refused comment on the race through his office.

Dear could not be reached for comment, but political observers feel that Dear will not run at the risk of losing his judgeship.

Sources said the Hasidic community felt Hikind turned his back on them by supporting pro-choice and pro-gay marriage candidate Brad Lander in his recent and successful run for the 39th City Council district, which also covers a small portion of Borough Park. That community backed conservative Democrat John Heyer, and Heyer wound up winning the Borough Park portion of the district, 1,245 to 219 or roughly 6-to-1 vote.

“This is an indirect referendum on Dov Hikind, no question about it,” said another source. “If Greenfield wins, the era of Dov Hikind as the supreme ruler of Borough Park and the community is over.”

Yet, while a Greenfield victory would hurt Hikind’s role in the area as kingmaker, he still remains hugely popular in Borough Park. Hikind knows how to work with people and his assembly seat would not be in jeopardy, sources said.