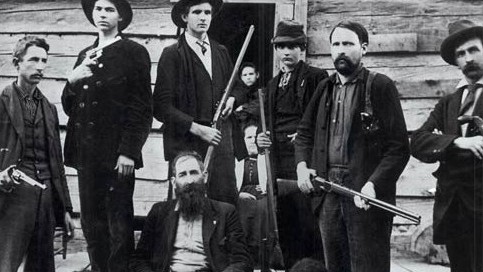 Elul is upon us, and it is perhaps proper to study the dynamics of the Hatfields and McCoys in order to best prepare ourselves for Yom HaDin.
The Hatfields and McCoys were two rural families from the West Virginia/ Kentucky area that were part of the greatest machlokes ever in the history of the United States. It is said that the debate was fueled over the debate about the ownership of a pig.

Floyd Hatfield had physical possession over the pig, but Randolph McCoy claimed it was actually his. His proof? The “notches” or markings on the pig’s ears were clearly McCoy, not Hatfield, marks.
The matter was taken to the local Dayan – or, lehavdil, Justice of the Peace. “Preacher Anse” Hatfield (negiyos, anyone?) ruled for the Hatfields by the testimony of Bill Staton, a relative of both families.
Subsequently, Staton the witness, was killed by two McCoy brothers, Sam and Paris. They, however, were later acquitted on the claim that they had shot Staton in self-defense.

The feud lasted some 38 years in the late 1800’s and resulted in lost time, money, energy, and tragically – the loss of dozens of lives – on both sides of the feud.

The Sheiltos (131), the BaHaG (Mitzvah 166 – Jerusalem edition), and the SMaG (Lo Saaseh 157) understand this Gemorah in its plain meaning that it is a biblical prohibition to persist in a Machlokes. And while the Rambam (Sefer HaMitzvos Shoresh 8) indicates that the Gemorah is a Rabbinic asmachta, – even according to him the prohibition is subsumed under another Torah Mitzvah – #45. – lo sisgodedu.

The Ksav Sofer writes (Responsa OC #36) of the very horrific sin or fire that is a machlokes d’rabim a public feud involving many people.

Rabbi Yaakov Lorberbaum zt”l (the author of the Nesivos) in his peirush on Chumash, explains the Gemorah in Eiruvin (19a) that machlokes leads one directly to the doorway of Gehenam.
The Shla (Shaar haOsios #2) writes: “Take this principle in your hand – the sin of machlokes is worse than the sin of Avodah sin.”

He cites the Mishnas Rabbi Eliezer (chapter 4) that there are three places where we see that Hashem is forgiving in regard to Avodah Zarah but not so in regard to the sin of holding onto Machlokes.

WHEN A FEUD HAS ALREADY OCCURRED

If, heaven forbid, a feud has already occurred, a truly G-d-fearing person should make every attempt to make peace and resolve the machlokes. Certainly, he should not attempt to convince people to involve themselves and spread the feud. Doing so, the person can mitigate hatred and rather cause shalom to spread.

Rav Elyashiv zatzal advised that if someone sees that he is about to become involved in a feud or machlokes, he should begin the process of Teshuvah. The reason is that Machlokes is usually caused by some incorrect or evil matter within ourselves and we are misdirecting ourselves to seek out fault in others and thus involve ourselves in machlokes.

WE HAVE OUR OWN HATFIELDS AND McCOYS

It is unfortunate, that we in the Torah community are also not immune to the Hatfield and McCoy phenomenon. Machlokes creates horrible situations where families are no longer united or together. It makes no difference what the original cause was – whether it was a debate over a pig – or a piece of jewelry or a property. The origins of the Hatfield/ McCoy moshol is quite clear and has a resounding message: We should look at money and all matters goshmius as if they are chazir treif.

WHY WE ARE CALLED KNESSES YISROEL

The Shla explains that we, the Jewish nation, are called Knesses Yisroel because of our unity and oneness, which reflects the Unity of Hashem above (see also Rashi Tehillim 133:1). When we cause factions, splits and disunity, we cause tremendous tremors up in the Heavens and cause us to be unworthy of our name.

How sad it is when families are torn apart because of Machlokes. How sad it is to see cousins who once played together – now apart. What a chilul Hashem it is to see borthers and sisters not talking to each other. What a grave chilul Hashem it is when politicians are aware of feuds within our own communities and thus develop keenly honed political skills that will not alienate them from one part over the other.

Is there no greater chilul Hashem than this?

THE VERSE IN TEHILLIM

The pasuk in Tehillim (133:1) tells us, “Hinei ma tov umah na’im – sheves achim gam yachad – Behold what is good and what is pleasant is when brothers sit together in unity.” There are two important things in which we can take note of when we study this pasuk. And both are remarkably pertinent.

Firstly, the plain simple meaning is that parents take great nachas in seeing children together. Seeing brothers helping each other, looking out for each other, as every parent knows – creates a remarkable combination of feeling of pride, happiness and nachas swelling within the parent. This is true for both parents alive as well as those who are no longer with us. When we think about this, how can we not make up with a brother or sister?

Secondly, the meforshim all point out that the posuk refers to both the first and second beis Hamikdash, the achim referring to the Kohen Gadol and the like. There is deep significance in that the rebuilding of the Beis HaMikdahs is associated with the pasuk of brothers being together.

Elul is the time where we can and should attempt to resolve all of these differences within us. Former business partners, brothers, sisters, brothers. Let’s reach out and send a favorite gift for Shabbos with a small card – or so.