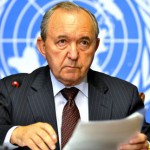 [VIDEO LINK BELOW] Rabbi Shmully Hecht, an advisor to ‘Eliezer’, the Jewish society at Yale University, last week confronted Justice Richard Goldstone after he addressed an audience hosted by the McMillan Center at the International Relations Department.

Hecht reports the audience was attended by 200-300 people, 80%, by virtue of their age, were not from the student body, but “local crony anti-Semites”. The remainder was students and faculty. Goldstone spoke for 45 minutes. The following events occurred immediately prior to the question and answer session.

After the address, Hecht asked “Mr. Goldstone, how do you distinguish between a government sanctioned policy of targeting and killing civilians versus the possibility of individual occurrences that happened to soldiers on the battlefield and do you firmly believe the Israeli government has a policy to kill civilians.”

Hecht explains that “Goldstone hesitated to respond and the crowd was slightly scattered due to interruptions prior to his answer”.

Hecht: Judge Goldstone, I feel sorry for you. What are you going to do when the facts are unraveled and the evidence is clear that Goldstone report was a sham and not credible based on video and audio coverage of the war?

Goldstone: Should that occur, I will rejoice.

Hecht: I will tell that to Alan Dershowitz, professor at Harvard Law School who wrote a response to your report and I will tell it to the prime minister of Israel. And on that day that you rejoice, I will embrace you and hug you and you will be welcomed back to the Jewish Nation, your nation. I shook his hand and he looked me in the eye like a troubled Jew in time of despair.