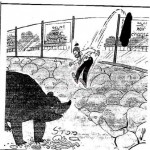 One can only guess where this will end, but Yated has responded to the counterattack which appeared in the Shas-affiliated Yom L’Yom newspaper last week, addressing the harsh criticism voiced against Shas by MK R’ Moshe Gafne. Gafne used the Knesset plenum and other forms to come out in strong terms against Shas following the party’s decision to join the World Zionist Organization.

As was reported by YWN-Israel (http://www.theyeshivaworld.com/article.php?p=46353), Gafne accused Shas of compromising its principles for “jobs and funding”. Shas responded harshly, with some party officials recommending that Gafne make his way to Maran Rav Ovadia Yosef Shlita and hope he will forgive him for his harsh statements, pointing out Shas never openly criticized Ashkenazi Gedolei HaTorah Shlita.

Well this round seems to be Yated’s, as the newspaper devotes its headline and other stories to the Shas decision, using less than favorable terms to describe the move. A caricature is added to assist in getting the anti-Shas message across. It depicts the Shasnik jumping into the Zionist bear’s den, opting to ignore the signs that warn “keep away”. Alongside the bear’s habitat are the bones of the former National Religious Party officials, who were just consumed by the wild [Zionist] beast.