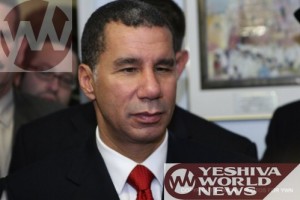 As the state went another day without a new budget yesterday, Gov. Paterson was hard at work – meeting with his criminal defense lawyer.

The NY Daily News spotted Paterson outside the midtown office of lawyer Theodore Wells, where the governor spent at least three hours.

“It was fine,” he told The News as he exited Wells’ office building.

Paterson, according to sources close to him, has yet to be interviewed by probers looking into whether the governor improperly interfered in a domestic violence case.

While Paterson met with his attorney, lawmakers were in Albany, where the state budget is more than three weeks late.

“He keeps saying his problems aren’t a distraction. Well, where is he today?” asked one frustrated lawmaker.

Assemblyman Michael Benjamin (D-Bronx) was willing to cut the governor some slack.

“You can’t hammer a guy for having to defend himself,” Benjamin said. “If it was every day, it would be a problem.”