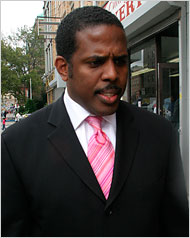 Embattled NYS Sen. Kevin Parker this afternoon publicly apologized on the floor of the chamber for accusing his colleagues of racism — but vowed to continue to speak out about racial issues.

Parker acknowledged his accusation last week that most Republicans and some Democrats in the Senate are white supremacists “brought commotion and emotion” to the chamber that may “distract and divide us or divert us from the important work of the people of New York State.”

“If I have offended people in this chamber in any way, I offer my sincerest apologies for my zealous advocacy,” Parker said.

“I can’t see into anyone’s soul and I should not have personalized my comments because of the issues I spoke about are larger than just one individual or group,” Parker said.

But he said to the extent his comments will stir debate and discussion on issues of race, exclusion and “new opportunity,” he will participate and asked his colleagues to be “partners in that debate.”

Apparently, Parker shouldn’t hold his breath on that one…

Few Republicans approached Parker at a committee meeting held shortly after his statement.

May 2010: NY Post claims Parker created a do-nothing Brooklyn charity, and used most of the $18,750 in taxpayer funds he steered to it to hire the brother of his chief-of-staff as a “planning consultant.”

April 2010: Parker went on a nearly two minute tirade against a republican colleague, accusing him of being a racist.

June 2009: Attorney John Conway, 59, said he was on the Senate floor when Parker sought to disrupt a GOP-controlled proceeding that Democrats considered illegal.

“He said to me, ‘What are you looking at, punk? Do you know who I am and don’t you read the newspaper, punk?’” said Conway.

May 2009: Parker was indicted on assault and other charges after being accused of attacking a New York Post photographer who took his picture.

A Brooklyn grand jury handed up the indictment charging the Democratic Senator with second and third degree assault, third and fourth degree criminal mischief, third degree menacing and second degree harassment. If convicted, he faces up to seven years in prison.

2005: Parker was arrested on charges of punching a traffic agent who was writing him a ticket. The charges were dropped after Parker agreed to take an anger management class.