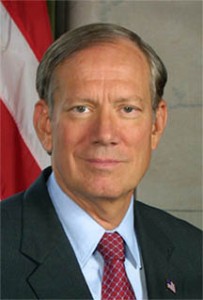 Sarah Palin isn’t the only former governor/former mayor who’s mulling a run for president in 2012.

On ABC’s “Top Line” today, former Gov. George Pataki, R-N.Y., told us that – as Palin has said – he’ll run for president if he determines the other Republican candidates don’t offer the right kind of leadership going forward.

“When you look back at the past two years, it’s been very disappointing, not only — not just for Republicans, but for the American people,” Pataki told us. “And I think it shows the importance of experienced leadership — leaders who have shown the ability to govern and to move forward in a nonpartisan way, leaders who have been tested and shown their ability to get through those tests.”

“What I’m going to be looking at is, do we have the right people out there who have that experience, who have experienced leadership, who have been challenged and who can bring people together — not just Republicans and conservatives, but conservatives [and] Democrats. And make a decision on who else is out there, and whether or not they have those characteristics we need to be able to win this election and govern successfully.”

Pataki, like Palin, was a mayor before he was governor.

“It was a challenging job, mayor of Peekskill, let me assure you. Twice the size of Wasilla,” Pataki said.

Pataki said he would support Palin, R-Alaska, should she become the Republican nominee for president, citing his reluctant support for tea party gubernatorial candidate Carl Paladino, R-N.Y., in his home state as evidence that he would fall into line behind her.

“It was hard for me to support Carl Paladino. And I did that. So certainly if the choice is between her and President Obama, I don’t think I’d have any difficulty at all supporting Sarah Palin,” Pataki told us.

Pataki said he voted for Paladino, but he expressed disappointment that he was a drag on other candidates in New York State last week.

“I think we got massacred at the top and it affected the entire vote down the line, but first of all, we may well end up with seven more Republican members of the House than we had on Nov. 1st,” Pataki said. “And in all likelihood the Republican Party will have control of the state senate, in the state legislature, which is critical going into reapportionment.”

“So we had our victories, but we should’ve done a lot better,” he added. “But when you lose the top of the ticket by over a million votes, it has a negative impact up and down the line, and that’s what happened.”

Pataki – who worked with his PAC, Revere America, to support GOP candidates this year — cautioned his party’s leaders not to follow tea partiers too far to the right, now that Republicans have control of the House.

“That risk is there, and we saw it in the election results Tuesday night. Some of the more extreme candidates who got the nominations because of tea party support, like in Delaware with Christine O’Donnell, not only lost, but lost big. And I think that we have to keep our eye on the ball here, and that is that the American people are giving us an opportunity, a second chance.”

“I think we have the chance to govern successfully, and that is what the independents are looking to see,” he added.