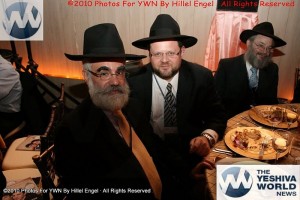 A warehouse at Brooklyn, N.Y.’s Pier 12 erupted in dance Sunday night as approximately 4,500 people got on their feet, locked arms, and circled around the giant room to the rhythmic chords of traditional Chasidic melodies.

Coming just after the traditional roll call portion of the gala banquet of the 27th annual International Conference of Chabad-Lubavitch Emissaries, the dancing included everyone, from Chabad House directors from Asia to Torah teachers from Europe to a billionaire philanthropist, Ukraine businessman Gennady Bogolubov, who just minutes earlier had wowed the crowd with his personal story of Jewish discovery and his construction of Dnepropetrovsk’s Menorah Center, slated to be the largest Jewish Community Center in the world.

All told, emissaries and their supporters came to the Brooklyn Cruise Terminal from 76 countries, demonstrating a Jewish unity that transcends national boundaries.

“The whole point of the conference is to bring emissaries and their supporters from around the world together in one place so that we can inspire each other and derive the strength to inspire those around us,” said Rabbi Moshe Kotlarsky, conference director and vice chairman of Merkos L’Inyonei Chinuch, the educational arm of Chabad-Lubavitch. “The work of countless people, emissaries and conference committees always awes us.”

Apropos the Conference theme, Ukrainian mining and metals magnate, Mr. Gennady Bogolubov, who has been sharing his largesse to help Chabad Shluchim fund their family life-cycle events, delivered the keynote address. Bogolubov established the Simcha Fund in 2007 and participates in celebrating the birth of a child, bar mitzvah or wedding of every Chabad representative, with a gift from the fund. Donating millions, said Bogolubov, has made him a partner in Chabad’s work across the globe. “Now I want to become not a partner, but a part of Chabad.”

Bogolubov held the audience’s attention as he described the unlikely turns of his life, as a result of the inspiration of his own Chabad mentor, Rabbi Shmuel Kaminetzki of Dnepropetrovsk. “Today it’s my pleasure and a big honor to be a Jew in Dnepropetrovsk. Although I used to be shy to wear a Kippa, I now wear Tzitzit.”

YWN PHOTO ALBUM: Click HERE for a large photo album with hundreds of photos by Hillel Engel for YWN.